The sleepy little town of Glen Ellyn probably isn't the first spot folks in the Chicagoland area think of when they look for some of the Midwest’s finest arts and culture, but the McAninch Arts Center (MAC) at the College of DuPage (COD) has been steadily working for the last 30 years to change that. With a recently renovated facility, gorgeous indoor and outdoor environments, and an enthusiastic (and relatively new) director, the MAC—as it's more commonly known—is bursting with entertainment and cultural experiences for audiences of all ages and backgrounds.

The care and attention to detail are evident well before anyone even enters the building. Says Martinez,  “You walk into the space and realize it's a very first class experience with full service bars and a box office and coat check. Our ushers are all trained and warm and welcoming.”

She adds, “It's a complete entertainment experience. Just the venue alone blows people away.”

With 30 years of history, it's not surprising that the MAC was well-prepared to add to its already substantial contribution to the arts in the Western suburbs. After decades of success, COD and the MAC were able not only to give their home a 35 million dollar facelift, but to take their offerings to a new level—going from what had traditionally been a hefty season of several dozen performances to over 130 events each year—all carefully curated with local audiences in mind.

“The goal of the MAC is to be a cultural resource,” explains Martinez. “I always want to try to find how (we) can engage with the arts on different levels.”

Far from dictating what audiences should see, Martinez began by asking audiences what they really wanted  to see. She recalls, “What I started with was a lot of audience surveys and talking to the audience. Now, after three years, I can see what they enjoy.”

What the MAC's audience enjoys is an incredible array of performances and events from high end jazz concerts to outdoor movie nights in the summer. Since Martinez took the helm of the McAninch Arts Center three years ago, the theater has doubled its programming and tripled its number of subscribers.

“I think what people are amazed at is the variety we have,” says Martinez.

Beyond the performances themselves, audiences are also treated to pre-show discussions before many of the events. Known as “MAC Chats,” the free talkbacks often feature a professor from the College of DuPage or, in many cases, one of the artists directly involved in the performance.

Having such an impressive arts center is unusual for a two-year college. Says COD President Dr. Ann Rodeau, “This is a very rare and unusual circumstance, and we're delighted to be associated with the MAC.”

While the shows are important to the overall culture of the College of DuPage, Dr. Rondeau believes that the MAC offers the community much more than an evening's entertainment. She explains, “The MAC cuts deeper and reaches deeper than putting on a show or any kind of great art performance or production...There's a profound sense of caring about people.”

She adds, “Every time I'm out and about, I hear about the MAC. There's a sense of connectedness, connection, and community.”

Martinez has been hard at work building that connection between the MAC and the community—a connection made even more special because the MAC is in Martinez's hometown. She was initially brought on as the Interim Director and quickly discovered that she was eager to make her stay permanent.

“I fell for the staff first,” she remembers. The renovations at the McAninch Arts Center wrapped up early, and Martinez and her staff jumped in with both feet to get everything in place to open up sooner than expected. “Everybody had their hearts in it,” she says. “We got to know each other so well, and we just clicked.”

After a mad scramble of finishing touches on the building and on the season itself, Martinez was happy to throw her name into the running for Director of the MAC. It was an opportunity to continue working with people who are as passionate about the arts as she is.

Once the audiences arrived and Martinez had officially been named director, she quickly discovered she was in the right place. Seeing former classmates, her first grade teacher, and plenty of customers that frequent her mom's Glen Ellyn beauty shop, she says, “I fell for the audience even harder because I knew and loved most of them from when I was a kid.”

As it turns out, the MAC loves Martinez right back. Dr. Rondeau explains, “She's our heart and our soul and our brains. She has really taken the theater to a whole new level. It was in a good place before she came, and it's in even a better place now.” Indeed, the 30th Anniversary Season at the MAC is one of the best yet. Though there are only a few months remaining in their milestone year, plenty of opportunities remain to get out and enjoy the MAC.

Asking Diana Martinez which of the remaining events are “can't miss” is a challenge considering there are so many to choose from, but she did manage to share a few suggestions. Her first is Mike Super 2.OH! (March 4). Mike Super was the winner of NBC's Phenomenon and a finalist on NBC's America's Got Talent. Billed as a “magical mystifyer,” he's attempting to predict the headline of a local newspaper in advance of his performance date. If he's wrong, he's going to refund everyone's ticket. “I'm nervous about that but excited,” laughs Martinez.

Black Violin (March 11), a talented string duo that combines classical music with hip hop, R&B, and bluegrass. “They're so awesome,” says Martinez. “It's really powerful.” Music City Hit Makers (April 28) is Martinez's third pick and features singer-songwriters from Nashville (“the most famous people you've never heard of”) and poignant stories behind their number one hit songs.

And if that’s not enough for you, the MAC still has nearly 50 events coming up before their season ends in May. From concerts to stand up comedians to shows from Buffalo Theatre Ensemble (the MAC's resident theater company), there are multiple events every week including a dedicated art museum with one of the most valuable art collections in the Chicago suburbs.

And don't forget about the productions from the College of DuPage's talented students—COD has produced some renowned talent over the years including David Govertson (who now performs with the Lyric Opera) and of course, the beloved John and Jim Belushi.

The MAC is indeed a hidden gem shining brightly in DuPage County aiming, to serve the community well.  Says Dr. Rondeau, “We are so proud of the Mac...It's a treasure,” a treasure audiences throughout Chicagoland are lucky to have.

Director of the McAninch Arts Center at the College of DuPage in Glen Ellyn (photo by Lorenzo de Gregorio). 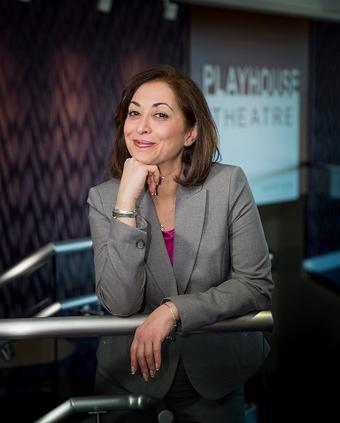 After three decades, the McAninch Arts Center has a new look, new audiences and a new director with a passion for bringing top flight arts and culture to the Western Suburbs.