After a 10-year hiatus, Opus Cactus makes its return with a new look, fresh energy and a host of surprises. Set to a hypnotic mix of music from J.S. Bach to new age to tribal, this prop-laden piece of 19 seamless vignettes uses low-flying trapeze, harnesses, belly dollies, vaulting poles, oversized fan, puppets and skirts, a swing-like hammock, a rolling metal sculpture and outrageous costumes all in an effort to transport audiences to the exotic world of the desert.

Sections such as “Dream Catcher” and “Ostrich of the Imagination” showcase the virtuosity and versatility of the dancer-illusionists on stage. Dancers include Steven Ezra, who was a 2011 finalist on America’s Got Talent with the shadow performance troupe Catapult; Jonathan Eden, who joined MOMIX in 2004; and Anthony Bocconi, formerly with Lar Lubovitch Dance, now with MOMIX since 2015, among a host of other longtime MOMIX artists.

Moses Pendelton (choreographer and MOMIX artistic director) formed the MOMIX ensemble in 1981 as an offshoot of the dynamic dance company Pilobolus, which he co-founded while a senior at Dartmouth College in 1971 and performed with as full-time member with the company until 1980.

​Known internationally for presenting work of exceptional inventiveness and physical beauty, MOMIX, now in its 36th year, is a company of dancer-illusionists celebrated for its ability to conjure up a world of surrealistic images using props, light, shadow, humor and the human body. In addition to stage performances world-wide, the company has frequently worked on special projects and in film and television. It was featured in PBS’s “Dance in America” series and one of the first IMAX films in 3-D, IMAGINE, which premiered at the Taejon Expo 93 and was subsequently released at IMAX theaters world-wide. 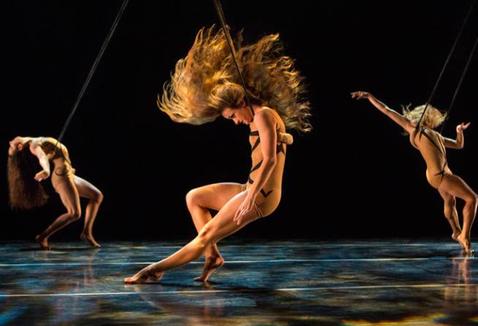 Members of MOMIX in Opus Cactus, which will launch the 30th season for McAninch Arts Center at the College of DuPage this fall (photo courtesy of MOMIX).