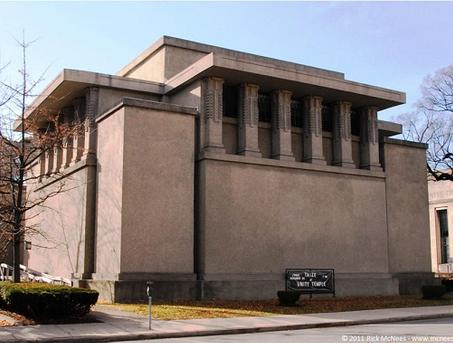 ​Wright designed the building in 1905 for his own Unitarian congregation and completed construction in 1908. Unity Temple continues to serve a Unitarian Universalist Congregation.

The only remaining public building from Wright’s Prairie years in the early 1900s, Unity Temple’s bold design and unconventional concrete construction prompted Wright to characterize the building as his contribution to modern architecture. Inside is a magnificent sanctuary noted for its high skylights of amber-tinted leaded glass, which have been meticulously restored. Layers of paint in both the sanctuary and Unity House, the secular side of the building, were peeled back and walls were restored to their original colors, as were all woodwork, lighting and ornamental fixtures.

“Even if you have already visited Unity Temple, you will be stunned by the brilliant use of light and space in this magnificent building,” said Celeste Adams, president and CEO of the Frank Lloyd Wright Trust, which runs tours at Unity Temple and four other Wright sites in Oak Park and Chicago.

​The Frank Lloyd Wright Trust is a leading national Frank Lloyd Wright nonprofit organization based in Chicago, where the largest number of original Wright sites is located. The Trust boasts a dedication to the preservation and interpretation of Wright’s design legacy, and it operates public tours at five Chicago area sites, offering both in-school and onsite programs for youth, families and adults as well.  Owner, operator and preservation steward of Wright’s Oak Park Home and Studio (1889/1898) where Wright established his career and created the Prairie style of architecture, the Trust also operates the iconic Frederick C. Robie House (1908-10) in Chicago’s Hyde Park neighborhood; The Rookery Light Court (1905) in the Chicago Loop; and Emil Bach House (1915) in Chicago’s Rogers Park neighborhood. For more information, visit flwright.org.