Jaume Plensa, digital rendering of the "Look Into My Dreams, Awilda" installation in Chicago's Millennium Park (photo courtesy of the Chicago Department of Cultural Affairs).

In celebration of its 10th anniversary, Millennium Park will feature a special installation of work by Jaume Plensa, the world-renowned sculptor and creator of one of the park’s most prominent attractions, the Crown Fountain. “Jaume Plensa: 1004 Portraits” features four large-scale portraits of young girls positioned in the park such that they complement and expand upon the story of the 1000 LED portraits of Chicago residents that illuminate the Crown Fountain.  The installation will open to the public on Wednesday, June 18 and remain on display through December 2015; it is free and open to the public.

The first sculpture, “Looking Into My Dreams, Awilda,” is made of resin and stands 38 feet tall.  It will be encountered by visitors as they enter the park at Michigan Avenue & Madison Street.  The work’s surreal and majestic presence bridges the frenetic energy and distractions of city life with the tranquility of the park. Magnificent in scale, the piece’s beauty, power and serenity encourage viewers to stop and experience a moment of quiet contemplation.

Three cast iron sculptural portraits, titled “Laura,” “Paula” and “Ines,” will be installed in the South Boeing Gallery (immediately east of the Crown Fountain) and stand 18 feet tall. Despite their great materiality, the sculptures have a hologram-like quality. The installation of the works, which are on loan from the artist, is co-presented by Millennium Park Foundation with the Chicago Department of Cultural Affairs and Special Events, and is sponsored by The Boeing Company, with support from the Richard H. Driehaus Foundation.

“These four portraits are each individually awe-inspiring but in this configuration also perfectly extend the powerful grandeur of Mr. Plensa’s Crown Fountain into the surrounding areas of Millennium Park,” noted Donna La Pietra, chair of the Millennium Park Foundation. “We are tremendously grateful to Mr. Plensa for allowing Chicago to host these pieces; we can think of no better way to celebrate our 10th anniversary than by hosting such an impressive array of works by one of the artists whose contributions to Millennium Park have made it a model for public spaces world-wide.”

Plensa will host a public discussion of his work Monday, June 16, from 6-7 p.m. in Fullerton Hall at the Art Institute of Chicago, 111 S. Michigan. Presented in partnership with the Millennium Park Foundation, the conversation is free and open to the public; guests should enter through the Michigan Avenue entrance.

Plensa’s work will also be on display throughout the Chicago area this summer. Richard Gray Gallery will exhibit “Private Dreams” in its Chicago space, June 12 – September 27, with an opening reception June 12, 6-8 p.m.  The exhibition will feature eight new sculptures from Plensa’s iconic series of heads in a range of materials including bronze, glass and, for the first time, volcanic basalt.  Standing six feet tall, the basalt works capture portraits that seem to silently emerge from the stone, with the backs of the sculptures deliberately left unpolished and raw. Installed as a group, imposing yet peaceful, the three figures lead viewers into a new conceptual and even spiritual space.  In addition, his “Silent Music” will be on display on the grounds of the Ravinia Festival this summer. 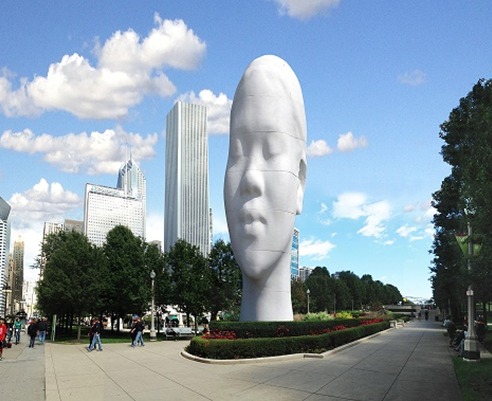