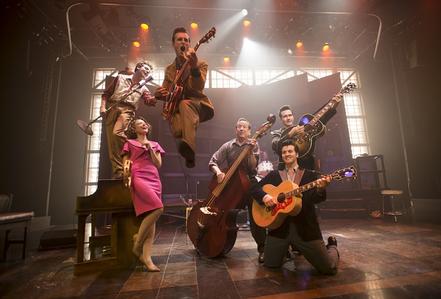 With almost 3,000 performances and now in its eighth year in Chicago, Million Dollar Quartet is Chicago’s longest-running Broadway musical. The producers of the Tony Award-winning rock ‘n’ roll musical have announced it is set to close its open ended run at the Apollo Theater in Chicago’s Lincoln Park on January 17, 2016.

“When Million Dollar Quartet opened at the Goodman Theatre in 2008, we were hoping for the best for our 4-week run at the Owen. To quote Sam Philips, the Father of Rock ‘n’ Rock, ‘We’ve enjoyed success beyond our wildest imaginings,” noted producer Gigi Pritzker.

The Tony Award-winning musical is inspired by the famed 1956 recording session that brought together legendary rock ‘n’ roll icons Johnny Cash, Jerry Lee Lewis, Carl Perkins and Elvis Presley for the first and only time.

“We now look forward to the next chapter in Million Dollar Quartet’s history,” continues Pritzker. “It is with mixed emotions that we bid farewell to Chicago. Mostly, we celebrate the overwhelming support and success this production has received.  We celebrate the many artists who have performed with us, we celebrate our crew, staff and community partners who have been instrumental in the success and long run of the show.”

On December 4, 1956, an auspicious twist of fate brought Johnny Cash, Jerry Lee Lewis, Carl Perkins and Elvis Presley together. The place was Sun Records’ storefront studio in Memphis.  The man who made it happen was Sam Phillips, the “Father of Rock ’n’ Roll,” who discovered them all. The four legends-to-be united for the only time in their careers for an impromptu recording that has come to be known as one of the greatest rock jam sessions of all time.

Million Dollar Quartet features a treasure trove of the greatest rock ’n’ roll, gospel, R&B and country hits from the musical legends portrayed on its auspicious stage. They include “Blue Suede Shoes,” ”Great Balls of Fire,” “Sixteen Tons,” “Who Do You Love?,” and Whole Lotta’ Shakin’ Goin’ On,” just to name a few.

The show had its world premiere at Florida’s Seaside Music Theatre, and was subsequently staged at the Village Theatre in Washington, breaking box office records.  In Chicago, the production moved to the Apollo on November 5, 2008, following its sold-out, limited engagement at the Goodman’s Owen Theatre.  The Broadway production garnered three Tony Award nominations, including Best Musical, Best Book of a Musical and Best Featured Actor in a Musical, Levi Kreis (winner); three Drama League Award nominations; and an Outer Critics Circle Award nomination.  Million Dollar Quartet is the longest-running Broadway musical in Chicago’s history.

For more information, visit www.milliondollarquartetlive.com. Tickets are available at the Apollo Theater box office, by phone (773) 935-6100, and online through Ticketmaster, www.ticketmaster.com.