The Milwaukee Art Museum has announced the promised gift of an extensive collection of work by French graphic master Jules Chéret. The unparalleled group of more than 500 Chéret artworks, one of the largest and most comprehensive of its kind, has been generously promised by Milwaukeeans Susee and James Wiechmann. The gift encompasses the full range of Chéret’s innovative output from his bold, expressive posters advertising theatrical events, social gatherings and a myriad of products; to designs for book covers and menus; to intimate lithographic studies of his models. Often referred to as the “father of the modern poster,” Chéret inspired many other important artists of his time including Henri de Toulouse-Lautrec and Pierre Bonnard.

​“Susee and I are thrilled to add our Jules Chéret poster collection to the museum’s treasures where it can be shared by all,” said James Wiechmann. “These posters that lit up the streets of Paris in the late 1800s will now shine in the galleries of our Milwaukee Art Museum and those of other museums as they are exhibited around the country.”

​The Wiechmanns were lenders to the museum’s popular 2012 exhibition, Posters of Paris: Toulouse-Lautrec and His Contemporaries, and from there began an important relationship with the institution. In addition to the promised gift of their Chéret collection, the Wiechmanns have underscored their commitment by underwriting a curatorial position. Due to their generosity Britany L. Salsbury will join the museum in February as associate curator of prints and drawings.

Salsbury comes from the Museum of Art, Rhode Island School of Design where she has been the Andrew W. Mellon curatorial fellow in the Prints, Drawings and Photographs department since 2015. During her tenure there she worked on a major exhibition scheduled to open in June 2017 entitled Altered States: Etching in Late 19th Century Paris, which has an accompanying publication. She also developed a number of exhibitions including Inventing Impressionism (2016), and regularly instructed classes from RISD and Brown University on the history of works on paper in the museum’s print study room.

As the associate curator of prints and drawings, Salsbury will oversee the Chéret gift, along with the museum’s broad and diverse collection of works on paper. The museum’s is known for its work in the areas of German Expressionism, French printmaking from the 16th through the 19th centuries and important collections such as the Landfall Press archive.

​“We look forward to welcoming Britany as an integral part of the museum’s curatorial team,” said Marcelle Polednik, Ph.D., Donna and Donald Baumgartner director. “In addition to managing our works on paper collection, her extensive experience makes her the perfect person to catalogue and develop a major exhibition based on the Chéret gift.”

Home to a rich collection of more than 30,000 works of art, the Milwaukee Art Museum is located on the shores of Lake Michigan. Its campus includes the Santiago Calatrava–designed Quadracci Pavilion, annually showcasing three feature exhibitions, and the Eero Saarinen–designed Milwaukee County War Memorial Center and David Kahler‒designed addition. The museum recently reopened its Collection Galleries, debuting nearly 2,500 world-class works of art within dramatically transformed galleries and a new lakefront addition. This reimagined space also allows for the presentation of additional changing exhibitions and is always worth the trip north for a little cultural exploration.

Visit milwaukeeartmuseum.org for more details about the museum’s programming and offerings. 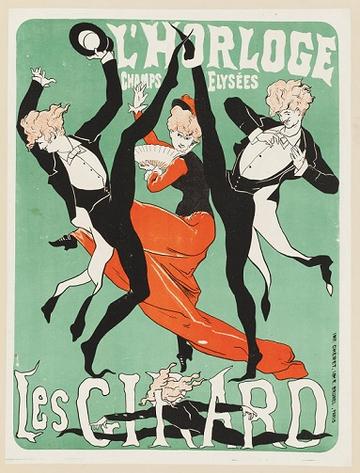