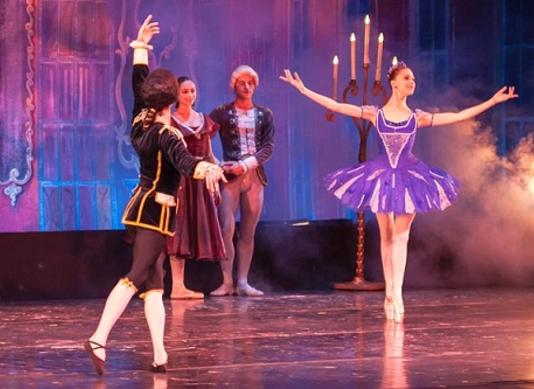 Moscow Festival Ballet to Mark its Return to the Chicago Area with the Universally Beloved Evening Length Ballet, Cinderella

By popular demand, Moscow Festival Ballet will make its return to the McAninch Arts Center (MAC) with one of the world’s most beloved stories, Cinderella,  Sunday, January 14 at 2 and 6 p.m. More than 50 of the company’s highly skilled dancers will grace the stage in Prokofiev’s lavish, entertaining full-length ballet hailed by the Durham, North Carolina Chronicle as Journal as “An impressive performance of a classical ballet, energized with dramatic expression and sensational steps.”

At the heart of Cinderella is the classic fairy tale about a hopeful young woman, her cruel stepmother and stepsisters, a fairy godmother and a handsome prince that has captivated young and old alike since the 17th century. Although this Cinderella has the familiar elements of the glass slipper and a magical spell that ends at midnight, it also introduces some new characters including four fairies who change the seasons as they dance to help Cinderella’s fairy godmother change rags into a formal gown.

The ballet was first choreographed to Prokofiev’s score in 1945 by Rostislav Zakharov and this choreography serves as the base for Moscow Festival Ballet’s production. Rather than focusing on details of the story of Cinderella’s rise from rags to riches, the production offers an abundance of lively, entertaining dance mixed with majestic and sophisticated touches of traditional pantomime performed against a lush and colorful setting.

Moscow Festival Ballet’s artistic director, Sergei Radchenko, graduated from the Moscow School of Dance in 1964 and went on to work with the Bolshoi Ballet for 25 years. Upon leaving the Bolshoi, he founded Moscow Festival Ballet in 1989, envisioning a company that would bring together the highest classical elements of his former company within the framework of Russian classic ballet. Since its inception, Moscow Festival Ballet has toured throughout Europe, Asia and the United States performing such favorites as “Sleeping Beauty,” “Swan Lake,” “Don Quixote,” and “Romeo and Juliet.”

The performance takes place January 14 at 2 and 6 p.m. Prior to the evening performance, there will be a free MAC chat at 5 p.m. led by Dr. Kelly Stokes, Community Engagement Coordinator with Salt Creek Ballet and adjunct Humanities faculty member at College of DuPage.