Building on a long-standing and rich history of working with Grammy-winning contemporary chamber ensemble eighth blackbird, the Museum of Contemporary Art Chicago has announced the Chicago-based ensemble as this year's artists-in-residence. Throughout the residency—spanning September 2015 through June 2016—the artists of eighth blackbird will be embedded in the galleries, utilizing the MCA as their studio space. They will rehearse and perform throughout the museum sharing the creative process of making music with MCA visitors. During the unique residency, there will be a regular series of accessible and engaging talks, workshops, and live performances that showcase the work of the group as well.

The eighth blackbird residency will occupy the museum's third-floor galleries, which will be divided into two designated spaces: a studio/rehearsal room and a visitor engagement space. eighth blackbird will work at the museum rehearsing in the studio space to allow visitors to experience their creative work up close. Outside of rehearsal times, visitors will be able to see what rehearsals are like through an immersive video soundscape that projects footage from a previous rehearsal of David Lang's these broken wings across the walls of the galleries.

Through accompanying audio, visitors will be able to listen to the compositions that the musicians are preparing for upcoming concerts and hear the discussions that the artists have with each other as they rehearse. Instruments and scores will also be present in the space when the artists are not on-site.

In the adjacent engagement space, the gallery has been transformed into a gathering space for visitors to experience participatory musical installations and explore how to listen to and engage with new music. The innovative engagement space features an interactive installation of John Cage's seminal Child of Tree (1975) —a conceptual work that inspired the museum to select a group of instruments made of plant materials. This installation presents visitors with the opportunity to explore new ways of listening as they perform the piece using the amplified instruments. Graphics and archival materials that were sourced in collaboration with music libraries at Northwestern University and the University of Chicago are also installed to tell a story of how the contemporary music field is evolving, both in Chicago and nationally. As the residency progresses, additional projects will also emerge in the engagement space.

In addition to occupying the gallery spaces, eighth blackbird will hold two performances presented by MCA Stage in the museum's Edlis Neeson Theater. Other members of the new music community will also contribute to the residency by leading performances, talks, and workshops on the second Tuesday of each month, from October through May (specific programs will be announced each month).

eighth blackbird, the Chicago-based, three-time Grammy Award-winning sextet has provoked and impressed audiences for twenty years across the country and around the world. One the industry's most formidable ensembles, eighth blackbird began in 1996 as a group of six entrepreneurial Oberlin Conservatory students. Over the course of two decades, eighth blackbird has commissioned and premiered hundreds of works by dozens of composers including David T. Little, Steven Mackey, Missy Mazzoli, and Steve Reich, whose commissioned work, Double Sextet, went on to win the Pulitzer Prize (2009).

The ensemble's mission extends beyond performance to curation and education. They collectively served as music director of the Ojai Music Festival (2009), enjoyed a three-year residency at the Curtis Institute of Music, and the ensemble holds ongoing Ensemble-in-Residence positions at the University of Richmond and the University of Chicago. The name "eighth blackbird" derives from the eighth stanza of Wallace Stevens's poem, Thirteen Ways of Looking at a Blackbird (1917).

For more information about eight blackbird and their MCA residency programming, visit mcachicago.org. 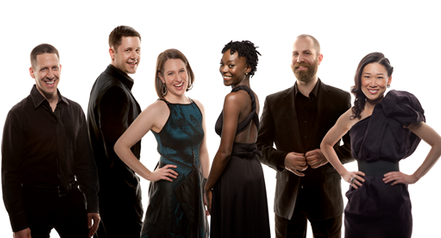