​The Museum of Contemporary Art Chicago has announced the creation of the Dunya Contemporary Art Prize, a major new contemporary art prize awarded biennially to mid-career artists from the Middle East or its diaspora. For its first award, the jury has selected Qatari-American artist Sophia Al-Maria, who will receive a $100,000 prize as well as a commission for a new work by the MCA that will be presented in a major exhibition accompanied by a catalogue. The prize is made possible with the support of the Shulamit Nazarian Foundation.

The name Dunya, meaning world or universe, reflects the global focus of the award and the shared vision of the MCA and the Shulamit Nazarian Foundation to represent diverse perspectives and bring attention to new and daring artistic voices. The new prize focuses on artists who are at a developed stage in their career, when the award can offer a substantial opportunity to advance their artistic practice. The goal of the prize is to foster contemporary artists from the Middle East and its diaspora whose work is rigorous, challenging, and unconventional, and to present them as part of the MCA's acclaimed Ascendant Artist series, which features the most relevant new artists working today.

​Shulamit Nazarian says, "Art offers a powerful and universal cultural language that connects us with what we have in common, educates us about what is different, and builds our curiosity about what we do not understand. Our intention through the Dunya Contemporary Art Prize, and in everything we do through the Foundation, is to build bridges and support an understanding of the diverse cultures of the Middle East."

An international jury of experts in the field of contemporary Middle Eastern art-led by Dr. Omar Kholeif, MCA Manilow Senior Curator and Director of Global Initiatives-selected Sophia Al-Maria as the first winner of the Dunya Contemporary Art Prize in April 2018. The jurors included Hans Ulrich Obrist, Artistic Director of the Serpentine Galleries; Antonia Carver, Director of Art Jameel; Clare Davies, Assistant Curator of Modern and Contemporary Middle Eastern Art at the Metropolitan Museum of Art; and Michael Darling, Chief Curator at the MCA.

The jury released a statement acknowledging the inaugural prize-winner’s pioneering work, citing her implementation of a “new visual language in contemporary art.” The jury noted that Al-Maria’s practice illustrates the diversity of ways that artists are working in the twenty-first century. “Her critical insights into contemporary culture, examining histories of science fiction, feminism, and the global socio-political condition, feel more urgent now than ever. We are honored to award the inaugural Dunya Contemporary Art Prize to Sophia Al-Maria.”

​Sophia Al-Maria (b. 1983) is a Qatari-American artist, writer, and filmmaker who has brought her global perspective to the dramatic transformations in the Arabian Gulf region that have been occurring over the last several decades. She coined the term "Gulf Futurism" to describe the social shifts in cities such as Dubai (UAE) and Doha (Qatar), where unprecedented economic growth is paralleled with social inequality, labor, and environmental issues. Al-Maria's work often uses diverse forms of technology, and is produced from an emotional starting point. She explores cultural, social, political, and environmental issues that affect the Gulf region. She also addresses the isolation of individuals and communities via technologies, such as the Gulf region's Bedouin community where her family has roots, which has experienced striking changes to their largely ancient way of life in recent decades.

​Raised in Washington State and Qatar, Al-Maria studied comparative literature at the American University in Cairo and aural and visual cultures at Goldsmiths, University of London. Her work has been presented in exhibitions and biennials internationally, including Whitechapel Gallery, London, UK (2016); Whitney Museum of American Art, New York (2016); and New Museum, New York (2015), among others. 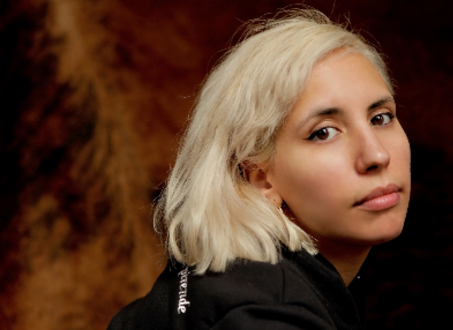