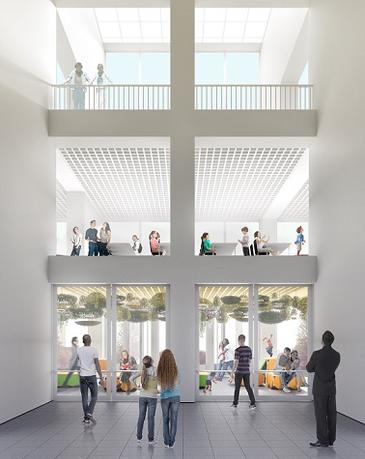 Conceptual rendering of the MCA redesign by Tom Hancocks.

The Museum of Contemporary Art Chicago is giving its iconic building a massive architectural redesign, and in a recent statement has announced the names of the creative team that will reimagine many of its public spaces. Led by the Los Angeles architects Sharon Johnston and Mark Lee of Johnston Marklee, the redesign is set to convert 12,000 square-feet of the building into free and accessible public space all while staying squarely within its existing footprint.

The team of architects taking part in the redesign includes renowned Turner Prize-winning British painter Chris Ofili, who will create the restaurant environment; Mexican design duo Pedro y Juana, who will design the Commons, a new social engagement space; and Chicago chef Jason Hammel, who will serve as the new chef for the restaurant. Says Madeleine Grynsztejn, MCA Pritzker Director, "We are thrilled to bring together this world-class artistic team for a new concept that interweaves art, food, design, and learning throughout the MCA's public spaces. These creative artists represent both local and global perspectives—their collaboration and mutual inspiration will produce unparalleled encounters for our visitors."

The project will create three important public offerings: a destination restaurant on the ground floor that connects to a new engagement space on the second floor, and a new third floor with classrooms and a flexible meeting space that puts learning at the physical center of the museum. Grynsztejn notes, "This project efficiently re-uses the current space to fuel the vital connection between artists and audiences. Every space and service the museum offers should create a meaningful social and cultural experience, and with this redesign, we are positioning the museum to connect with a wider audience that is even more diverse and inclusive."

International artist Chris Ofili, whose work combines painterly and cultural elements to play on ideas of beauty while carrying messages about Black culture, history and exoticism, will create an environment for the newly redesigned restaurant at the MCA. The space will include at its heart a permanent, large-scale, site-specific artwork—his first museum commission of this kind in the United States.

The chef of the new restaurant is celebrated Chicagoan Jason Hammel, the executive chef and owner of award-winning Lula Café in Chicago's Logan Square community. Known for his trailblazing, creative seasonal cuisine, Hammel made Lula Café a pioneer of the farm-to-table movement, of which he was an original voice.

Pedro y Juana are best known in Chicago for Dear Randolph (2015), their distinct interior environment at the Chicago Cultural Center that featured a network of movable lamps, rocking chairs, tables, and a wall tapestry for the 2015 Chicago Architecture Biennial. Other recent projects have included Anastasia (2016),  a courtyard installation of lanterns for the Hammer Museum's Gala in the Garden; the exhibition display for The Natural Order of Things (2016) at the Jumex museum DF/Mexico; and Hotel Palenque Is Not in Yucatan (2014), in which Pedro y Juana worked in collaboration with Montserrat Albores Gleason to produce an exhibition and architectural intervention that was the site of Little Pig Session (Sesiones Puerquito 2012-15), during which they had a roast to prompt a social and conversational experience among attendees.

The award-winning architectural firm Johnston Marklee, who were recently named the Artistic Directors of the 2017 Chicago Architecture Biennial, re-imagined the layout of the MCA in a new master plan. The firm is recognized for projects in which they collaborate with contemporary artists as well as chefs. Their clients include art and cultural institutions, commercial developers, and private clients such as the Hammer Museum, Harvard University, University of California, and the Menil Foundation. Of the appointment, Madeleine Grynsztejn says, "Johnston Marklee understands the strength of our Josef Paul Kleihues-designed building, and they carry a deep respect of history throughout their architectural practice. Their legacy of stellar work-increasingly referenced as a leader in the field-resonates strongly with our interest in making thoughtful interventions to our building. With this re-design, our distinctive space will become even more welcoming to our audiences."