On June 7th, Chicago’s Museum of Contemporary Art premiered a unique and transformative exhibit of works by British artist Simon Starling. Starling, not a typical household name in American art, creates work that explores the cyclical nature of the world, and spans various media including installations, photography, and film. Simon Starling: Metamorphology, marks his first survey in a major American museum.

The exhibit follows two intertwining trajectories, the first of which focuses on Starling’s interest in art history. Starling is based out of Copenhagen and facing rapidly growing fame in Europe. He is always concerned with those who preceded him, and his work featured in Metamorphology interacts heavily with Chicago’s local art history. Henry Moore, a pillar of modern sculpture and famed artist of Chicago’s Nuclear Energy, inspired one of Starling’s pieces to be featured in the exhibit, giving it a concrete local grounding. The University of Chicago is one of the birthplaces of the atom bomb, and Moore was commissioned to design a monument to commemorate that event. This story is the subject of Simon’s big film installation, and a good example of the artist interrogating art history and being aware of his context.

The second trajectory the exhibit focuses on Starling’s engagement with geopolitical and socioeconomic fault lines. Starling is fascinated with scientific approaches to art making. That interest is anchored in a deep curiosity about the materials that he works with. His sculptures are anything but traditional, and offer unique and transformative insights into the way the world works. Nearly every piece in the show speaks to those global concerns: the cycle of production and consumption, global trade and the outsourcing of labor, and circles of cycles of circulation. The exhibition's title is, in part, a reference to that.   The term “metamorphology” was coined by Dieter Roelstraete, the Manilow Senior Curator at the MCA. “It’s a very direct allusion to the logic of metamorphosis; the basic formula of all art making; the transformation of something; turning something that’s not valuable into something valuable. (Metamorphology) doesn’t express the ambition that the audience itself will be transformed, but my own personal curatorial policy. I’m interested in art that thinks of itself as a form of knowledge. I like the idea of art as a way of distributing or producing new knowledge. If this exhibit contributes new insights into the way the world works, it will be a huge success.”

Roelstraete’s relationship with Starling is a very personal one. Roelstraete, already familiar with Starling’s work, was invited by Phaidon Press to contribute to a book about the artist. The two met and Roelstraete began to study and understand Starling’s work better and better. “He’s a phenomenal artist, and his work really speaks to concerns that appeal to me—concerns that make the work very topical, relevant, and urgent. He is a great example of an artist who is interested in historical research, and has also found a way to bring art home, in a way.” Starling is making a new piece for the exhibit that is based on a sculpture at Chicago’s Art Institute, which adds further grounding in Chicago. “The Henry Moore inspired piece is a really beautiful story,” Roelstraete explains, “quite intricately composed, and it teaches you a lot of things. Art may have global aspirations but it has to make sense locally. That’s the greatest part, getting to see and work with Simon. I learn new things about the way the world works, and that’s an important contribution.”

Metamorphology features 10-11 pieces by Starling, and due to their vast size, spans several rooms. On the second floor of the south wing, the exhibit covers one large room and two smaller rooms. One sculpture is  mounted outside, called "Flaga," Italian for “flag.” The sculpture is a small Italian sportscar mounted on a wall. The Fiat was an emblem of the Italian automobile industry, however after the war, Fiat outsourced a lot of its labor to Poland. Starling purchased a red Fiat in Italy and drove it to Southern Poland, where the Polish factory replaced the hood, doors, and other parts with white pieces. Starling then drove the car back to Turan, Italy for an exhibit and mounted the car on a wall, from which angle it bore a striking resemblance to a Polish flag (hence, Flaga). The piece will be mounted at a 90-degree angle on the wall; quite an imposing sight for museum members. It speaks not only to the economic concerns of Starling’s work, but also to his fascination with weight, gravity, balance, and material.

Roelstraete draws attention to one more piece in the exhibit, titled "Autoxylopyrocycloboros." The slideshow depicts Starling in a boat powered by a wood stove, floating on Scottish water. Starling begins to break apart the boat, feeding the wood to the stove, showing a process of autodestruction. “It’s a classic image of the artist going down with the rest of the boat; the mythology of the loop. I like it because it’s kind of funny, and there’s a light-heartedness to British humor. He treats these heavy handed art works as not only enlightening, but light, and he has a certain amusing spirit. The key ingredients of his work are all present and compressed in the piece.”

Transformer: Simon Starling and His Metamorphology 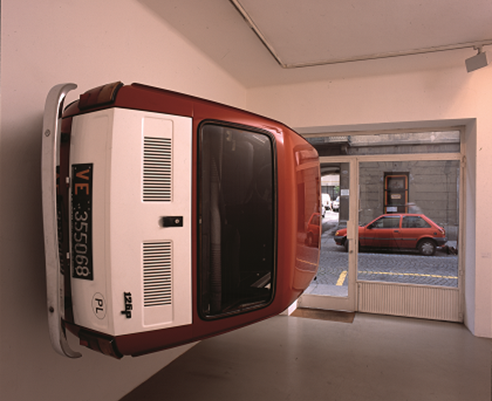