This December, the Museum of Contemporary Art Chicago (MCA) will present the first solo museum exhibition of Chicago artist and cartoonist Jessica Campbell, whose candid, often humorous textiles, comics, and drawings critique the traumas and absurdities of gender politics. For her MCA Chicago Works exhibition, Campbell re-envisions the life and artwork of Canadian painter Emily Carr (1871-1945), celebrated for her expressive landscapes, to explore the sexism women face in everyday settings and the creative possibilities of reading and telling stories from multiple perspectives.

Inspired by their shared roots in Victoria, British Columbia, Campbell presents a new suite of work engaging with the life of Emily Carr. Campbell approaches Carr's work through a feminist lens and across a range of media--from paintings and drawings to comics and textiles--to show the ongoing presence of seemingly distant art histories in the present day.

The centerpiece of the exhibition is an immersive carpet mural inspired by Giotto di Bondone's 14th-century Scrovegni Chapel, a masterpiece of the Italian Renaissance. Its frescoes depicting stories from the life of Christ are seen as an early precursor to the comic strip. In the carpet mural, Campbell's vivid, cartoon-like scenes interweave formative, highly personal narratives from both her own life and Carr's; though the artists grew up in Victoria nearly a century apart, many of the events Campbell recalls from her past took place in landscapes that Carr painted. The colorful floor-to-ceiling carpet dampens the sound in the gallery, creating a chapel-like atmosphere for viewing Campbell's poignant and at times difficult scenes.

Enriching the carpet mural's narratives is a free takeaway comic that extends each scene into a full page with multiple panels. Campbell pairs these complexly rendered stories with texts drawn from Carr's personal writings, providing an alternate way to parse the depicted scenes.

Other works in the exhibition explore Carr's biography from other angles: large-scale ink and charcoal re-creations of Carr's unpublished cartoons satirize the Victorian world she lived in, illuminating an otherwise invisible private life full of both daily indignities and female companionship. Campbell also references Carr's trip to the 1933 World's Fair in Chicago. A rug satirizes Century of Progress, a 1933 survey of mostly men's work at the Art Institute of Chicago, which a disappointed Carr was unable to see during her visit, leaving only with a catalogue of reproductions. Campbell's irreverent interpretations of the female nudes in the show demonstrate women's presence in the canon of Western art history primarily as muses, not artists. Together, the works comment on the representation of gender and encourage women's stories to be told in the first person.

Jessica Campbell is a Canadian artist and humorist based in Chicago, working in comics, fibers, painting, drawing and performance. Her graphic novel XTC69 was reviewed in Publishers Weekly, The Comics Beat, and The Comics Journal and her 2016 book Hot or Not: 20th Century Male Artists was reviewed by Hyperallergic and Comic Alliance. She has had solo and two-person exhibitions in Chicago at Roots & Culture and Sub-Mission and at La Galerie Laroche/Joncas in Montréal. Her work has been included in group shows throughout the Midwest and Quebec. Chicago Works: Jessica Campbell is organized by MCA Curatorial Assistant Nina Wexelblatt and runs from December 18, 2018 to July 7, 2019. Visit mcachicago.org for more details. 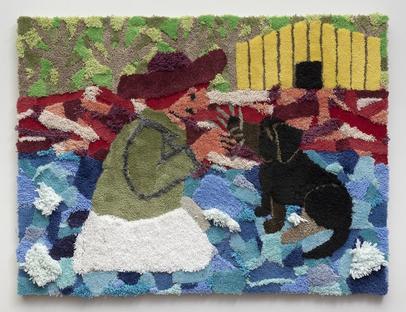