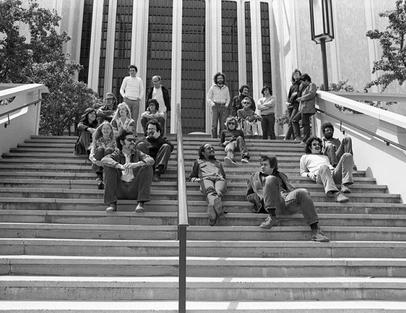 Back in the 1950s and 60s, with the new national network of interstate highways afoot and the lure of literary iconoclasm and post-World War II Beat culture, thriving art schools in California served as a potent draw for young artists around the U.S. With the added potential for artistic freedom, experimentation and collaboration that Los Angeles’ emerging art scene offered—and contrasted, perhaps, by the challenges that a move to New York (often considered the center of art and culture) posed—communities of artists (many from the Midwest) forged a path to the West Coast to find greater access to career opportunities, education and more palatable temperatures. Along the way, many artists found a collaborative spirit that yielded valuable social networks (across generations and geographies), by which they attended school, shared studios, exhibited work, engaged in activism and developed long lasting relationships.

Along with their own artistic merits, these artists brought Midwestern sensibilities that would create and indelible impact on education, artistic practice and politics seen in subsequent art emanating from the West Coast.

Tracing just how artists with ties to the Midwest helped to shape art and culture on the West Coast is a new exhibition on view at The Museum of Contemporary Art Chicago this fall entitled West by Midwest.

Spanning the early 1960s to 2010s, showcasing works by artists like Billy Al Bengston, Andrea Bowers and Judy Chicago, among many others, West by Midwest draws a distinct and focused through-line underscoring the ways that contemporary art practices spread and developed across social and geographic lines in the United States. The exhibition, which presents more than 80 artworks drawn primarily from the MCA Collection, was the brainchild of MCA chief curator Michael Darling, who proposed a show that traced the influence of artists from the nation's breadbasket and their art practice through their geographic movements, a kind of study in cultural anthropology for art and art history in the U.S.

As Chrarlotto Ickes, MCA Andrew W. Mellon Postdoctoral Curatorial Fellow, points out the migration began at a time when California was experiencing an economic boom. That boom resulted in a noticeable exodus to the state. Also, home to several fine art programs from CalArts to UC Davis, the draw for an artist looking to expand their opportunities was likely too strong to resist for many. Artists from the Midwest who obtained teaching positions in these institutions would have a major impact on subsequent generations of practitioners. But Ickes, who organized the exhibition with Darling, states that West by Midwest goes a step or two further than simply tracing the footprint of artists who took their careers to art centers on the West Coast, it also follows three overlapping linkages that formed the burgeoning networks between the two regions spanning: practice (the ways artists approach their work; place (the spaces where artists gather and exchange ideas); and people (the various human relationships that comprise an artist’s personal and professional circle).

Featured in the exhibition are artists Billy Al Bengston (from Kansas) and Judy Chicago (from Illinois). The two met in Los Angeles, where both were fascinated by the use of new materials, such as spray paints, plastics, and lacquer, and other techniques that became central to the emerging Finish Fetish movement. Blending the aesthetics of Pop Art, Minimalism, and Light and Space, Finish Fetish featured glossy, slick surfaces that recalled with immediacy staples of Southern California culture like automobiles, motorcycles and surfboards.

Also explored in the exhibition is the work of artist David Hammons. Hammons began making his famous body prints in the late 1960s after moving from his hometown of Springfield, Illinois to study art in Los Angeles. The artist would grease his skin with margarine, press his body onto the paper, and add a coat of powdered pigment to the surface of the print. In this unorthodox self-portrait, Hammon's Midwestern sensibilities play a role in shining a spotlight on stereotypes so often focused upon on the West Coast and how they tend to “flatten the self.”

The exhibition also explores how the landscape of Los Angeles also served as a site of improvisation, performance and collaboration for artists involved in Studio Z, a loose collective of African-American artists that included Hammons and Senga Nengudi (also from Illinois). Nengudi’s Ceremony for Freeway Fets is one example of their unique collaboration, this one involving a performance under a freeway overpass that was subject to protest by communities of color whose neighborhoods were under threat by the expansion of the city’s freeway system.

Artists Jim Shaw and Mike Kelley launched the band and collective, Destroy All Monsters, while attending the University of Michigan, and later moved to the West Coast as graduate students at CalArts. The exhibition features Kelley’s large-scale installation, Craft Morphology Flow Chart, which consists of crocheted dolls and sock monkeys arranged on tables, recalling the display of specimens in a natural history museum as commentary on the museum’s role in collection and preservation. Kelley went on to teach another generation of artists with Midwestern affiliations, such as Jorge Pardo (born in Chicago), Sterling Ruby (from Michigan), and Aaron Curry (studied in Chicago), who once shared studio space in East L.A. with friend and former Chicago artist Amanda Ross-Ho (born in Chicago).

As the exhibition traces the geographic migration of artistic practice and influence from the Midwest to the West Coast, it also lays down a firm framework for how artists create an interconnectedness that reaches beyond common professional interaction.

Ickles, an Easterner by origin, admits that while some of the information she has uncovered from her work in this exhibition may be surprising, it also presents an opportunity to change the paradigm by which we study art, art history and practice. She explained, as she was researching artists in the MCA’s collection for this exhibition, she began to “realize how this story of movement to the West could be told through a dynamic network of social, artistic, political and intellectual relationships. While art history is often taught through a neat succession of individual artists and singular masterpieces, I am hoping this exhibition changes that framework and offers another way to think about time, space, art practice, and history," she said. "West by Midwest also gives us an incredible opportunity to deeply consider the rich holdings of these artists and draw out collective stories that can be told through the MCA’s collection.”