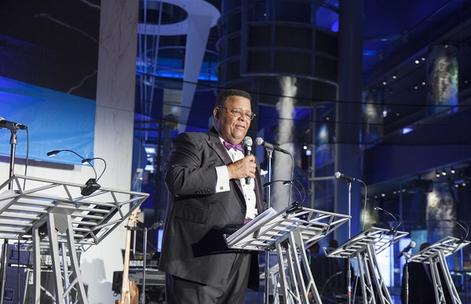 The Museum of Science and Industry, Chicago (MSI) hosted its 33rd annual Black Creativity black-tie gala on Saturday, January 30. The gala, planned in collaboration with a committee of prominent Chicago African-American leaders, raised more than $500,000 to support the annual Black Creativity programming and events, which pay tribute to the culture, heritage and science contributions of African Americans and help motivate youth in the sciences. This year, more than 500 people attended the gala.

“The Black Creativity Gala at MSI was an amazing event this year,” said David Mosena, president and CEO of the Museum. “The money raised will help create and offer Museum programs that inspire and motivate kids in the sciences and encourage them to think creatively about the problems that challenge our world.”

Art Norman, reporter with NBC 5 Chicago, emceed the evening’s program. Guests hit the dance floor to music by the Opal Staples Orchestra and DJ Nick Nicholson. Guests aso purchased raffle tickets for a chance to win prizes, including air travel courtesy of United Airlines, an in-home catered dinner from Food for Thought and a portrait package from Ebert Studios. The Black Creativity Innovation Studio was also open to guests, who were able to invent and craft their own pins and bracelets.

In addition to the Black Creativity Juried Art Exhibition and the Innovation Studio, guests also enjoyed other Museum exhibits throughout the evening, including MSI’s newest permanent exhibition, Numbers in Nature; as well as Science Storms and The Great Train Story.