Now in its 86th year, the Music Institute of Chicago will host its annual gala Wednesday, May 25 at the Four Seasons Hotel Chicago (120 East Delaware Place). The oldest community music school in Illinois and one of the three largest community music schools in the nation, the Music Institute is planning a celebratory evening highlighted by the presentation of the Dushkin Award to acclaimed violinist Joshua Bell.

The evening begins at 6 p.m. with cocktails and hors d’oeuvres, followed by an elegant dinner and awards presentation. Musical performances throughout the evening include some of the Music Institute’s talented Community School students and award-winning students from the Music Institute’s Academy for gifted pre-college musicians, celebrating its 10th anniversary this year.

The prestigious Dushkin Award, established 30 years ago and named for the Music Institute’s visionary founders Dorothy and David Dushkin, recognizes international luminaries in the world of music for their contributions to the art form, as well as to the education of youth. Past recipients include Deborah Rutter, André Previn, Lang Lang, Stephen Sondheim, Riccardo Muti and Yo-Yo Ma, among a host of other legendary artists.

Bell is one of the most celebrated violinists of his era. Equally at home as a soloist, chamber musician, recording artist and orchestra leader, Bell is music director of the Academy of St. Martin in the Fields. He performs with orchestras across the U.S., and last summer toured to South Africa and Shanghai. He has recorded more than 40 CDs on the Sony Classical label and has made numerous television appearances, from The Tonight Show to Charlie Rose to CBS Sunday Morning to Sesame Street. Convinced of the value of music as both a diplomatic and educational tool, he has performed for three U.S. Presidents as well as the President of China and devoted himself to several charitable causes, most notably Education Through Music, which has helped put instruments in the hands of thousands of kids in America’s inner cities.

The Music Institute of Chicago will also present its seventh annual Cultural Visionary Award for Chicago, which recognizes individuals who have provided visionary philanthropic and civic leadership for the broad spectrum of arts in Chicago and Illinois, to Lois M. and Harrison I. Steans. With their three daughters, they co-founded the Steans Family Foundation in Chicago 30 years ago. Committed to the belief that long-term personal involvement with individuals can change lives and communities, the foundation’s mission is to improve community development in Chicago. The Steans have made a commitment to North Lawndale, directing much of their foundation’s annual grants budget directly to working with residents on capacity building/leadership, economic development, education and youth development, housing, health and human services, and quality of life. The Steans have been longstanding supporters of the Music Institute, along with numerous other organizations throughout the Chicago area.

Honorary Chairs for the upcoming event are Mary B. Galvin, George Gingold, and Alexandra C. and John D. Nichols. Co-chairs are Fran and John Edwardson, Nancy and Scott Santi and David F. Heroy and Joycelyn Winnecke.

For more information about the upcoming gala or to purchase tickets or sponsorships, call 847.448.8327.

Acclaimed violinist Joshua Bell will be honored with the Music Institute of Chicago's Dushkin Award this spring in the institute's spring gala (photo by Bill Phelps). 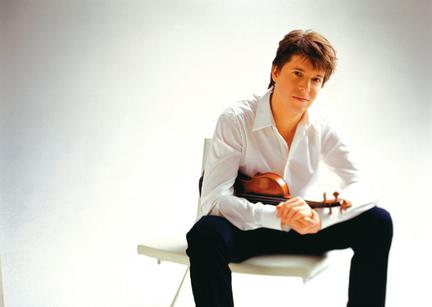