Musically Human Theatre (MHT), a professional not-for-profit company focusing on musical theater, has signed a lease with the City of Highland Park for space in the Karger Center at 1850 Green Bay Road, producing artistic director David Norwood announced earlier this week. MHT’s first season in the venue recently vacated by The Music Theatre Company will include intimate new productions of Passion, Next to Normal and Cabaret.

The company founded in New York City in 2010 has established a strong reputation for producing intimate revivals as well as new works in Manhattan venues that included the Duplex Cabaret Theatre in the West Village, the Richmond Shepard Theatre and CAP21’s 5th Floor Theatre. Norwood began to look for a new home outside the NYC region after frustrations built with the limiting structure of the New York theater world. Norwood explained that “the costs of doing business in the city in addition to lack of adequate and affordable spaces made it impossible for the company to do the kind of work that we wanted to do. New York City economics and audience habits that lead them to Broadway shows made it virtually impossible for a small non-for-profit like MHT to continue to exist.”

Norwood began to look around the country for potential new homes and was attracted to Chicago for its abundance of storefront theaters. He soon struck up an acquaintance with Michael Halberstam, the artistic director of Writers Theatre in Glencoe, who now serves on MHT’s Board of Advisors. “Writers Theatre is delighted to welcome Musically Human to the neighborhood. The more live theater on the Northshore the better it is for all of us,” says Michael. “David Norwood has put together a very exciting and ambitious season, and I am looking forward to every production and thrilled to be helping in an advisory capacity.”

“This move to Highland Park marks the beginning of a new era for MHT,” said Norwood. “It is convenient, comfortable, and offers audiences an intimate relationship to an especially fine stage space. It will prove a perfect fit for the work to come from MHT.” 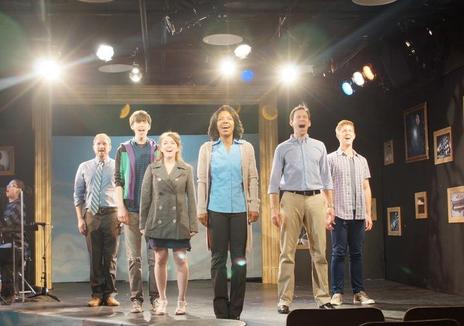