Dedicated to collecting, preserving and portraying the legacy of Greek history and culture in America, the National Hellenic Museum has the largest collection of Greek American artifacts and recorded oral histories anywhere. The National Hellenic Museum (NHM), 333 S. Halsted St., introduces its newest exhibition Lives Afloat: The Greek Refugee Crisis through the Lens of Tasos Markou 2015-2017 open Thursday, June 21, 2018 through spring 2019. This photographic exhibition portrays the realities facing refugees as they arrived in Greece at the height of the Greek Refugee Crisis.

By early 2015, the numbers of refugees pouring into Greece had dramatically increased to hundreds of thousands of men, women and children. Many fled their home countries, attempting to reach Europe over land and by sea. Most were fleeing violence, war or persecution, and more than a third were escaping the Syrian Civil War. Unlike economic migrants, refugees do not willingly leave in search of new or better opportunities. Rather, they are forced from their homes by threat of harm and unsafe conditions.

To compose the Lives Afloat exhibition, the NHM exhibition team utilized evidence-based reports and data from the United Nations High Commission for Refugees (UNHCR) and imagery of photographer Tasos Markou. Markou, born in 1983 in Larisas, Greece, studied photography at the Diek Voluou Public Vocational Training Institute. In 2015, he traveled to the island of Lesvos to cover the refugee crisis. His photographs capture some of these journeys — the difficulties of sea crossings, the living conditions in camps, and the boundaries encountered, particularly at the northern border of Greece. Daily life in the camps, including the poignant moments of families trying to adapt to living with limited resources and the sense of chronic waiting are portrayed.

​The NHM’s Lives Afloat exhibition shows a perspective of the Greek refugee crisis over a three-year period in three sections, Arrivals, Waiting, and Borders, to illustrate the experience through powerful photographs. Markou found himself changed by the experience, at times working more to provide aid as a volunteer than as a photojournalist.  "I decided it wasn't enough to just be a good person. You have to act. Lesvos changed me. It would change anyone who comes here,” said Tasos Markou.

The exhibition opened to the public on June 21. On June 23 photographer Tasos Markou, will present a program at the museum about his efforts to aid refugees in Greece. Throughout the coming year, this exhibition will be supplemented with public programming, docent-led tours, and invited speakers to help raise awareness about this crisis, and the fate of refugees across history.

​“It is so important for the National Hellenic Museum to be telling the story of the Greek Refugee Crisis with our own exhibition,” said Laura Calamos Nasir, Ph.D, National Hellenic Museum President. “It is crucial for the National Hellenic Museum to address recent history and portray the effects the crisis has had on so many. Using photos to tell the real story of a crisis impacting the Greek community, and indeed millions of lives, we aim to encourage people to learn more by seeking good sources of information, to gain more perspective and to develop a greater understanding of what is happening in the world, whether in the past or in current events. Visitors are invited to consider ways to get involved by learning more about the impact of nonprofit organizations and how effectively they directly impact peoples’ lives.”

Founded in Chicago as the Hellenic Museum and Cultural Center (HMCC) in 1983, the HMCC moved to the city’s Greektown neighborhood in 2004 and opened its current location on Halsted Street as the National Hellenic Museum in 2011. The contemporary four-story building is home to extensive collections, rotating exhibitions, classrooms and a stunning rooftop view of Chicago. Three floors of galleries explore ancient and modern themes and provide multi-use spaces to host tours, public programs and private events. The NHM boasts a rich repository of 20,000+ artifacts, photos, historic newspapers, books and an archive of 450+ recorded histories.

​​For information on the Lives Afloat exhibit or other NHM programming, visit www.nationalhellenicmuseum.org. 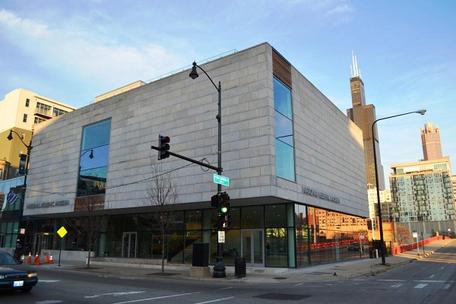