Maestro Kirk Muspratt leads the New Philharmonic at their home at McAninch Arts Center (MAC) at the College of DuPage in Glen Ellyn (photo courtesy of the MAC).

Maestro Kirk Muspratt and New Philharmonic, the professional orchestra in residence at the McAninch Arts Center (MAC), will open its 2017-2018 season with intriguing and interactive concerts entitled “Mahler 5” featuring a performance of Mahler’s Symphony No. 5 this September.

The concerts will begin with a special 30-minute "Classical Boot Camp" interactive talk with audience members led by Muspratt as assisted by several New Philharmonic principal musicians, offering insight into the details and backstory of the most famous of Gustav Mahler’s works. The "Boot Camp" is part of the performance experience and will be held on the MAC’s relatively new Belushi Performance Hall stage.

Mahler’s monumental hour-long Symphony No. 5 was hailed by Herbert von Karajan, one of the greatest conductors of the 20th century, as "…a transforming experience. The fantastic finale almost forces you to hold your breath.” To perform this work, New Philharmonic will be expanding the wind section and filling the stage with more than 70 musicians to the handle the demands of this colossal work.

Austrian-born composer Mahler (1860-1911) is known for his emotionally charged and subtly orchestrated symphonies; however it was decades after his death before he became recognized as a pioneer of 20-century composition techniques. His work often focused on death and afterlife. A composer of symphonies and songs with orchestra, during his lifetime he was primarily known as a conductor. Mahler served as director for the Vienna Court Opera (1897-1907), a job for which he converted from Judaism to Catholicism, and later led the New York Metropolitan Opera and the New York Philharmonic Orchestra. He passed away in Vienna from heart failure at age 51 before fully completing his tenth and final symphony.

“Mahler 5” takes place at the MAC in Glen Ellyn on Saturday, September 23 at 7:30 p.m. and Sunday, September 24 at 3 p.m. Following the performance the audience will have an opportunity to meet the conductor and orchestra members during “Cookies with Kirk” in the lobby. 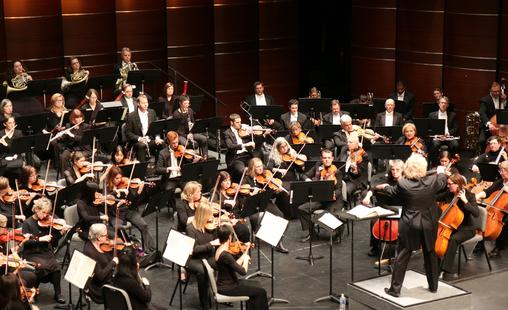