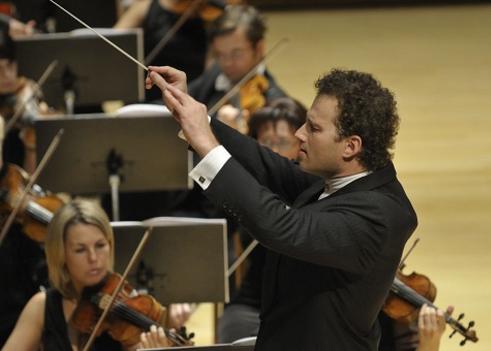 Nikolaj Znaider, internationally acclaimed Danish-Israeli violin virtuoso and Principal Guest Conductor of the Mariinsky Orchestra, makes his subscription concert conducting debut with the Chicago Symphony Orchestra (CSO) in December concerts at Symphony Center. Znaider leads the orchestra from the violin in a performance of Beethoven’s Violin Concerto on a program that also includes Shostakovich’s Symphony No. 5.

A groundbreaking work at the time of its premiere in 1806, Beethoven’s only concerto for violin is noteworthy for its length, scope and passages of intense virtuosity. Several subtle strokes of the timpani and a lyrical passage for winds open the concerto before the soloist joins and scales the heights of the violin’s range in singing, beautiful lines. The work’s meditative second movement leads directly into the recognizable and exuberant Rondo finale. The program will continue with Shostakovich’s Symphony No. 5, which was premiered in 1937 while the composer was under close scrutiny by the Soviet government. Though its memorable melodies and seemingly simple musical language supply the musical hallmarks of Soviet patriotism, the symphony’s subtle irony is cleverly disguised within its spirited scherzos and heroic fanfares.

Znaider first gained wide recognition as a soloist after winning first prize for the Carl Nielsen Violin Competition at just 16, and later the prestigious Queen Elisabeth Competition in Brussels. In 2010, he began his tenure as principal guest conductor of the Mariinsky Theatre Orchestra after previously serving as guest conductor of the Swedish Chamber Orchestra. He is a frequent guest conductor with many of the most esteemed orchestras around the world, including the Cleveland Orchestra, New York Philharmonic, Royal Concertgebouw, Staatskapelle Dresden, Montreal Symphony Orchestra, and Munich Philharmonic orchestras. He also has an ongoing recording collaboration with the London Symphony Orchestra (LSO) focused on works by Mozart, with the composer’s fourth and fifth violin concertos being featured in an upcoming release by Znaider and the LSO in March 2018. He has performed as a soloist several times with the CSO since his 2000 debut including a 2009 performance of Beethoven’s Violin Concerto with guest conductor Osmo Vänskä.