Interdisciplinary artist Michael Rakowitz, a professor of art theory and practice at Northwestern University’s Weinberg College of Arts and Sciences, accepted the Herb Alpert Award in the Arts for visual arts May 18 at a ceremony at the Herb Alpert Foundation in Santa Monica, California.

The Herb Alpert Award in the Arts honors five midcareer professional artists whose work is judged to be going in exciting or radical directions. Each of the recipients receives a $75,000 prize.

Rakowitz, who recently unveiled a sculpture of a 14-foot, winged Lamassu on the Fourth Plinth in London,  also works in radio, video, performance and architecture to create thought-provoking installations, including his long-term project The Invisible Enemy Should Not Exist, which re-creates artifacts looted or destroyed from the National Museum of Iraq. His solo exhibition, Backstroke of the West, was in view at the MCA Chicago September 2017 to March 2018.

The panel cited Rakowitz for “his bold and deeply researched, deeply human work. Unearthing hidden histories, he makes art that speaks to a broad scope of social, political and economic issues, which potently reflect our present moment and create bridges across time and cultures.”

More information is available on the Herb Alpert Award in the Arts website (herbalpertawards.com). 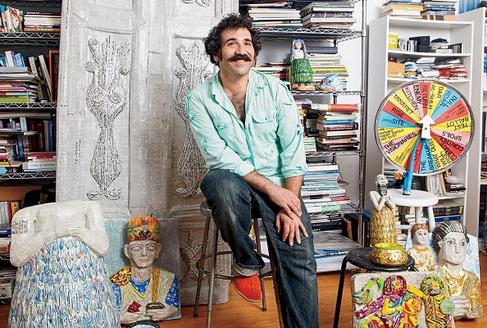 Artist Michael Rakowitz, professor of art theory and practice at Northwestern University, has been awarded the Herb Alpert Award in the Arts (photo by Colleen Durkin).