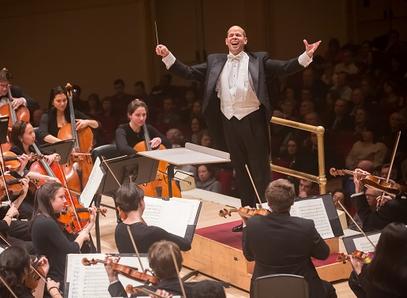 The Oberlin Orchestra, led by Raphael Jiménez with Jeremy Denk as soloist, at Carnegie Hall, 01/19/13 (photo by Chris Lee).

The nation’s oldest continuously operating conservatory, Oberlin Conservatory of Music, will make its Chicago debut this January in celebration of its 150th anniversary celebration as one of the world’s premiere professional training institutions for musicians. The Chicago tour is a key component of Oberlin’s yearlong anniversary and features more than 100 conservatory students in two performances.

Chicago audiences are already familiar with Oberlin Conservatory’s extensive network of alumni, including the Grammy Award-winning eighth blackbird sextet, which formed at Oberlin, and members of the Chicago Symphony Orchestra and International Contemporary Ensemble.

“The tour represents an important professional moment for our students, as they step out of the practice room and onto the stage of one of the world’s great concert halls,” says Andrea Kalyn, dean of the Oberlin Conservatory. “But it is also an opportunity for us to share the artistry and work of our students and faculty, and to bring alumni and friends together in celebration of music.”

The Oberlin Contemporary Music Ensemble will kick off the Chicago tour with a performance at Ganz Hall on the campus of Roosevelt University at 7 p.m. on Friday, January 29. The program will open with the North American premiere of One Bright Morning by Jesse Jones, featuring Oberlin student Olivia Boen, a soprano from River Forest, IL., in addition to Passion Prayers by University of Chicago Professor Augusta Read Thomas, featuring cello soloist and Oberlin faculty member Darrett Adkins (Oberlin Conservatory 1991); and the Grammy Award-winning piece, Meanwhile, written by Oberlin Professor of Composition Stephen Hartke. The performance will be led by Oberlin Professor of Conducting Timothy Weiss.

The Oberlin Orchestra will follow with a performance at Chicago Symphony Center on Saturday, January 30 at 8 p.m. under the direction of Associate Professor of Conducting Raphael Jiménez. The program includes Roosevelt University alumna Marcy Stonikas (Oberlin Conservatory 2002) as the featured soprano in Strauss’ Four Last Songs. Saturday’s program also includes Stravinsky’s The Rite of Spring and Berlioz’s Roman Carnival Overture. This performance will be preceded by a 7 p.m. lecture featuring Harvard University musicologist and author Thomas Kelly.

In addition to these main stage performances, Oberlin students will visit area schools and community music programs in Chicago and nearby Milwaukee, WI, as ambassadors for the prestigious conservatory, sharing their experiences, presenting brief concerts, and fueling inspiration for future generations of musicians

“It is worth noting the fact than an undergraduate orchestra can play The Rite of Spring with ease nowadays,” says Jiménez. “This is a piece that, for its premiere, took a professional orchestra 22 rehearsals to prepare. It speaks of the evolution of orchestral playing in the world and loudly speaks of the sophisticated training that our conservatory students are receiving.

“There is no room for error in this kind of repertoire,” Jiménez continues. “But nothing motivates Oberlin students more than a challenge, and to have the opportunity to perform it in Symphony Center makes it even more exciting for us.”

Tickets for the Oberlin Orchestra at Symphony Center on Saturday, January 30 are free but required. Reservations can be made through the Symphony Center Box Office (312-294-3000) or at cso.org. Admission to Oberlin Contemporary Music Ensemble at Ganz Hall on Friday, January 29, is also free, but tickets are required; reservations may be obtained by calling 440-775-8200.