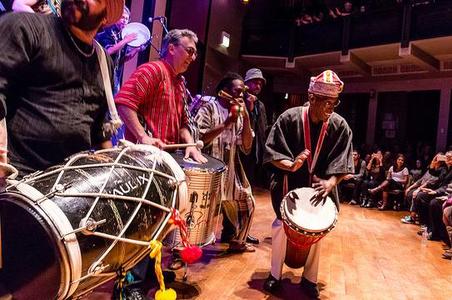 Old Town School of Folk Music, in conjunction with the Chicago Department of Cultural Affairs and Special Events (DCASE), will conclude its city-wide concert series, 77 Beats, with a capstone event on Friday, November 11 at 7:30 p.m. at the University of Chicago’s Logan Center for the Arts (915 E. 60th Street, Chicago). An exploration of all seventy-seven of Chicago’s ethnically-diverse neighborhoods, this 77 Beats event features Hyde Park Chicago Children's Choir, University of Chicago Middle East Ensemble and Greater House of Prayer Gospel Choir. Local food trucks will also be on hand to liven up taste buds along with audience spirits.

Throughout the spring, summer and fall of 2016, 77 Beats has showcased the diverse music and culture of each and every Chicago neighborhood, paired with other elements such as cuisine, visual arts and ethnic traditions in unique and unexpected locations, making for an immersive and rich cultural experience for Chicago's audiences.

​Highlights of this city-wide series of “pop-up” events included performances from Harmonica Hinds on downtown Chicago’s Riverwalk, Sones de México Ensemble at the National Mexican Museum of Art in Pilsen and Funkadesi at Old Town School of Folk Music’s own Lincoln Square facility.

This unique curation of music and culture could serve as a touchstone for arts projects seeking to tap the sprawling diversity that exists within the city's borders. “This has been a tremendous journey throughout all of Chicago’s 77 community areas for the Old Town School,” noted Uday Joshi, Old Town School of Folk Music’s director of Engagement and Innovation. “We are constantly celebrating and presenting the global diversity of Chicago inside of our theaters, but this project allowed us to activate the global communities where they reside, bringing the music straight to the people. Chicago is truly a global city.”

​77 Beats is the successor of Old Town School of Folk Music’s 2015 program, Iron Heart Chicago, which staged 60 concerts on ‘L’ platforms all the over the city last year.

​More information about 77 Beats can be found at 77beats.org.