The Chicago One-Minue Play Festival (#1MPF) returns to The Den Theatre this winter for its seventh year – this time exploring America and Chicago in 2017 in the wake of the Presidential election. The marathon evening of one-minute plays by more than 60 of Chicago’s established and emerging playwrights and directors is presented two nights only, Tuesday, February 21 and Wednesday, February 22, 2016 at The Den Theatre, 1333 N. Milwaukee Ave. in Chicago’s Wicker Park neighborhood.

Among the directors involved in this year’s festival are Wardell Clark, Spenser Davis, Rose Freeman, Lee Stark and Lexi Saunders.

“We are thrilled to celebrate seven years of #1MPF in Chicago, and we are proud to see our programming and the reach of our work diversifying – between the festival of women-identified artists, The Every 28 Hours Plays and the traditional 1MPF work that we are using to investigate what America and Chicago in 2017 post-election America looks like,” notes artists director Dominic D’Andrea. “The opportunity to gather the community of artists, activists and citizens and focus on ways that we might begin to design the world we want to live in is a beautiful and necessary action. I'm proud of the community, our partners at the Den and the stunning nuance of the work we've generated together.”

​The  #1MPF is America’s largest and longest running grass roots theater company, founded by producing artistic director Dominic D’Andrea. #1MPF promotes itself as a social barometer project, which investigates the zeitgeist of different communities through dialogue, consensus building and a performance of 50-100 short moments generated by each community. The collective works in partnership with theaters and/or social organizations sharing playwright, educational or community-specific missions across the country. The aim is to create locally sourced playwright-focused community events, with the goal of promoting the spirit of radical inclusion. #1MPF represents playwrights of different age, gender, race, cultures and points of career. The work attempts to reflect the theatrical landscape of local artistic communities by creating a dialogue between the collective conscious and the individual voice.

In each city, #1MPF works with partnering organizations to identify programs or initiatives in each community to support with the proceeds from ticket sales. The goal is to find ways give directly back to the artists in each community. Supported programs have ranged from educational programming, youth poetry projects, theater program in prisons and playwright residencies and memberships, to name a few.

Annual #1MPF partnerships have been created with theaters in over 20 cities including: New York, Los Angeles, San Francisco, Chicago, and Miami.

The Chicago One-Minute Play Festival: America Is… will take place Tuesday February 21 and Wednesday, February 22, 2017. Ticket and performances information may be found www.oneminuteplayfestival.com. 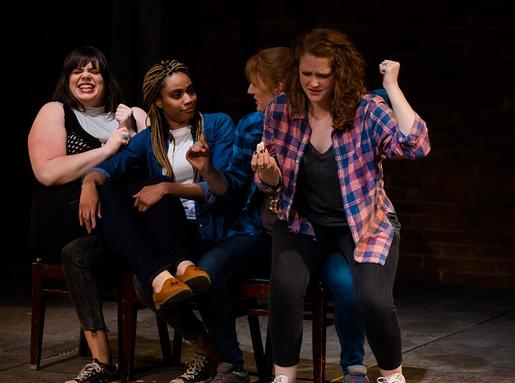