Orion Ensemble's Janet's Stage initiative is giving area students access to not only the chamber players' coaching, but their concert stage. 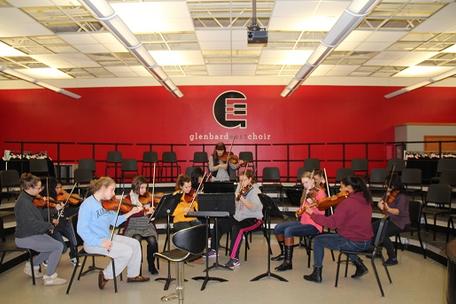 For 20 years, Janet Safanda was a staunch supporter and beloved friend of the award-winning Chicago-based chamber group, Orion Ensemble. Safanda began attending concerts and joined Orion’s Board of Directors early on in the group’s formative years. As chair, she served as an effective force spearheading strong support for the growing ensemble. As the group’s executive director, Kathryne Pirtle points out, “Her leadership was always inspired—and inspiring. The truth is—Janet Safanda loved chamber music and The Orion Ensemble and shared her enthusiasm with countless others who now love our music as well. Janet was truly a living angel. She is greatly missed.  We look forward to honoring her with our music and service for many years to come.”

For three years now, that honor and service has manifested, in part, in Janet’s Stage, a music education initiative by The Orion Ensemble that helps to cultivate the maturation of talents among select Fox Valley high schools’ orchestra musicians, sharing the Orion stage with young student artists in an effort to share Janet Safanda’s love of chamber music with the next generation of artists.

Pirtle explained that since its inception, the program went well beyond coaching young musicians, it forged a path to immerse students and their parents alike in the milieu of professional chamber music, fostering a future in music that might otherwise be difficult to realize. “(In our first year of the program), we also gave formal performances for the students and parents at their school within their school orchestra concert,” she told me. “(We) provided free-admission opportunities for them to regularly attend our concerts, and brought selected groups to perform on our stage.” In addition, Orion established Orion Artist Partners in Chicago at the Chicago High School for the Arts and the Chicago Youth Symphony Orchestras (CYSO). The program offers student ensembles both Orion coaching and performance opportunities on their concert stage.

Each school brought into the Janet’s Stage program must meet several criteria that establishes a firm commitment to the longer term benefits of the partnership. Participating schools make a commitment to actively form chamber groups at the beginning of the school year; develop strictly followed routine rehearsal schedules, so that their work with Orion can be most productive; bring students to Orion concerts (via free admission), providing an invaluable opportunity for them to see techniques they learn in practice in an actual professional performance setting; and also provide a portion of the funding necessary to facilitate the program’s activities.

During the course of that first year, Orion regularly worked with over 25 ensembles. That number has grown consistently over time. And over the course of the program’s young life, Orion’s musicians have already seen vast growth in not only participation but learning. Pirtle explained, “(Since our first year, we’ve) found that the level of ensemble preparation and participation increased…at Glenbard West, we coached several advanced quartets that are auditioning for highly competitive chamber music competitions at U of I, Midwest Young Artists and the coveted Fischoff.  At both Batavia and Geneva high schools, ensemble rehearsing skills greatly improved from the first year, and the level of artistry is noticeably higher.”

Importantly, that artistry is allowed to flourish on the Orion concert stage. In their spring 2015 concert program at PianoForte Studios in downtown Chicago, an advanced string quartet from the CYSO performed on the Orion Ensemble stage. The word “inspirational” does not do adequate justice to what that kind of experience can do for a young musician’s confidence and maturity.

This season, for the third year, Orion is partnering with Geneva High School and is beginning a new partnership with Glenbard East and its orchestra director, Tim Fawkes, is thrilled to have the program available to expose his students to world-class coaching. Said Fawkes, "Success in music requires a complex formula of the right conditions: access to good instruction; the will to focus intensely on one's craft; an environment that supports and nurtures excellence; and—maybe most importantly—excellent models to emulate. That is where Janet's Stage has been so meaningful for our students at Glenbard East."

In a time when arts education funding in public schools has plummeted to next to nothing, programs like Janet’s Stage are welcome resources that promise a healthy future for music and the arts. Says Pirtle, “The kind of growth that Orion has seen in (Janet’s Stage) inspires great confidence in the growth of this third year of partnering with programs throughout the Chicago metropolitan area. We have seen that each opportunity to mentor young artists is a promise of solidity for the future of the arts.”And that’s a promise that Janet Safanda made with her staunch support of The Orion Ensemble in their early years, and one Orion is keeping in her name now.