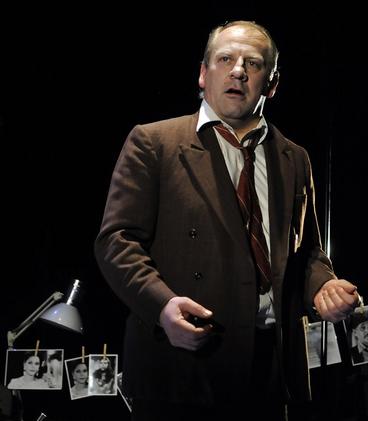 “In curating the Solo Celebration series, we were searching for plays that not only celebrated the form but redefined what it could do. Douglas Post has done all of that and more with his one-man thriller,” says Jacob Harvey, artistic director. “We are honored to host the premiere of the international efforts of a local playwright, and are thrilled that it brings acclaimed artists Simon Slater and Patrick Sandford to our city.”

The one-man murder mystery tells the story of Eveleigh as he is hired by an anonymous client to follow a mysterious showgirl in the streets of London. After witnessing the woman’s murder by an unknown assailant, he begins an investigation through the backstreets of London where he finds himself falling in love with a dead woman he’s never even met.

Post was commissioned by Slater to write a play to showcase his diverse talents as a singer, actor, magician and musician, and the product of their partnership was Bloodshot, one of the only solo thriller plays written. Charles Spencer of The Telegraph praised the play, saying “the ingenious writing of Douglas Post … has so cleverly reinvented the possibilities of the stage thriller.”

Touring in England and throughout Europe, Bloodshot has thrilled and rattled audiences since 2011.

​Berry- and Olivier Award-nominated artist Simon Slater has composed more than 200 original scores for theater, film, television and radio. As an actor he is a familiar face on British television, as well as having appeared in films and many critically-acclaimed theater productions in London and abroad. Recently, Slater’s theater credits include Chariots Of Fire, Wonderland, Viva Forever and Mamma Mia!, to name a few.

An award-winning Chicago-based playwright, Post has written a host of acclaimed works for the live stage, including Cynical Weathers, Blissfield, Drowning Sorrows and musicals God and Country and The Real Life Story of Johnny de Facto. His works have been produced in New York, Chicago, Los Angeles, Canada, England, Germany, Russia and other countries around the globe. He has also been commissioned to write screenplays for Warner Bros. and NBC, teleplays for WMAQ­TV and several radio adaptations of his own scripts.

​For more information about the series or for tickets, visit greenhousetheater.org.