It takes some doing to truly appreciate the arc of an artist from their first brush stroke to their very last. Snapshots of an artist’s output rarely give us the global view of their growth. More commonly, they give us a moment in time, a peek into only a portion of their evolution. On view at the Art Institute this winter, Andy Warhol—From A to B and Back Again, represents the first major retrospective on the artist’s work—the first to be organized by a U.S. institution—in 30 years and builds on new research, scholarship and emerging perspectives since Warhol’s untimely death at 58 in 1987.

​Encompassing more than 400 works, the exhibition presents a new view of the beloved and iconic American Pop artist, not only excavating the breadth, depth and interconnectedness of Warhol’s output across the entirety of his career, but also highlighting the ways in which he expressed prescient knowledge of some of the issues, effects and pace at which the digital age would emerge.

This is not the first time the Art Institute has devoted a single exhibition, of course, to Warhol. It also exhibited Warhol's work in a large-scale survey exhibition back in 1989, just a few short years after the artist's untimely death. The museum's permanent collection features many significant works by Warhol, including Mao, 1972, which serves as the centerpiece of the current presentation.

​The exhibition’s layout helps to underscore the broader view the show gives of Warhol’s trajectory. Said Thea Liberty Nichols, Interim Exhibition Manager for Modern & Contemporary Art at The Art Institute of Chicago, “There's much more to Warhol than the classic Pop Art products and stars of the silver screen that people know and recognize. One of the earliest works on view in the exhibition is a self-portrait Warhol made in 1948 while still a student at Carnegie Institute of Technology back home in Pittsburgh, and the exhibition concludes with a series of abstract works employing camouflage patterning from the final body of work Warhol created.

In addition to featuring the full scope of Warhol's artistic production across the whole of his career, the exhibition also includes his work across all media, including painting, drawing, printmaking, sculpture, film, video, photograph and some of his harder-to-characterize, experimental and collaborative projects. The exhibition’s design, developed by Ann Goldstein (Deputy Director, and Chair and Curator of Modern and Contemporary Art), takes the framing of The Art Institute's historic Mao, 1972 through a series of entryways and windows and thematizes it. Windows across the exhibition allow for spectacular sightlines throughout the show that also provide views of different periods in Warhol's work simultaneously instead of just strictly chronologically.

Warhol gained significant prominence in the 1960s for his iconic Pop masterpieces, widely known and reproduced works that often eclipse his equally significant late work, as well as his crucial beginnings in the commercial art world. This new exhibition culls all aspects and periods of his varied and prolific career and incorporates paintings, sculpture, drawings, prints, videos, archival and printed material, installation, films and media works.

One of the discoveries gleaned from showcasing the full breadth of Warhol’s output, rather than focusing on just a single period, is that the artist in fact did not slow down after surviving the assassination attempt that nearly took his life in 1968, but he actually entered into a period of intense experimentation, a nod to Warhol’s self-described process.

​Originally organized by the Whitney Museum of American Art in New York, the exhibition’s title emanates from Warhol’s description of his own painterly philosophy, as spanning from "A to B." Though it may have initially been intended as a self-deprecating quip, it does illuminate a through-line in his work, something rarely fully appreciated since the artist’s death. The exhibition decidedly shows that Warhol’s thinking and artistic production ranged well beyond that. It shows that the artist’s true genius lay in his ability to identify cultural patterns and to use repetition, distortion and recycled images in a way that challenges our faith in images and questions the meaning of our cultural icons. Warhol's construction of a public persona—and his sheer replication of an image in and of itself—were incredibly predictive of our current social media-saturated cultural moment.

​Visitors will see foundational work that Warhol created as a commercial illustrator during the 1950s. Many of these techniques and concepts of how to best feature a "product" are realized in this Pop works of the '60s.

The exhibition opens with the Narthex (or entryway), covered in Cow Wallpaper and encircled by a frieze of Warhol's iconic commissioned portraits, which he referred to as his "business art." The layout is unique to The Art Institute's (AIC) presentation and was conceived of Goldstein, curator of this presentation.

As for Warhol’s illusive process? Liberty Nichols explains that the exhibition does shed light on many areas of his practice. For example, “Warhol's use of the photo-silkscreen process, a commercial technique which he applied to his paintings, was a radical paradigm shift. At the time, the dominance of Abstract Expressionism was absolute. Warhol's mechanical approach, combined with the content of his imagery— which featured consumer products and Hollywood celebrities—was equally explosive.”

For Liberty, this exhibition is a once-in-a-lifetime chance to see Warhol devoid of the preconceived notions set upon him and his work for the past 50 years. Simply put,  “From A to B and Back Again is truly a historic opportunity to view this volume and this caliber of work by Warhol,” she told me. “Equally important, the exhibition also offers an incredibly rare opportunity to gain insight into, and exposure to, the private and personal side of an artist who literally spent a lifetime constructing and mediating their public persona.”

Thanks to this new exhibition, that public persona will be a bit more fleshed out for those interested in learning more about Warhol’s artistic evolution.

Andy Warhol—From A to B and Back Again is on view now at the Art Institute of Chicago. 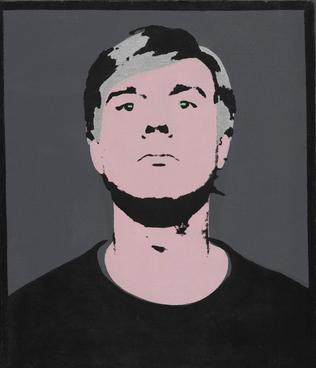 Journey of Andy Warhol
The Art Institute takes a deep dive into the artistic trajectory of the most iconic Pop artist of all time and reveals there's more to his already legendary legacy than meets the eye.