What do you get when you blend the music of the Beatles with an iconic work by William Shakespeare? Daryl Cloran's hit musical adaptation that's been taking audiences and critics alike by storm since it premiered at Vancouver's Bard on the Beach. We preview the production that comes to Chicago's Shakespeare Theater this spring. 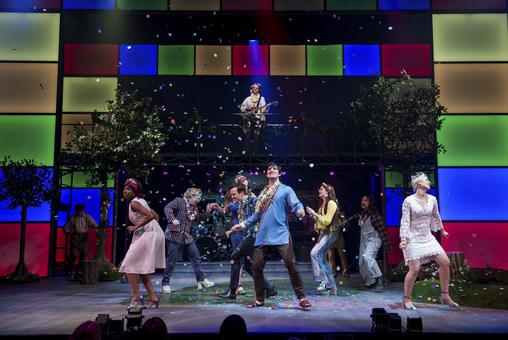 Cast of Daryl Cloran's clever adaptation of Shakespeare's As You Like It, (photo by Alice Koenig).

​Adapting well-beloved and iconic artistic work can be a truly risky pursuit. Take Shakespeare’s pastoral comedy, As You Like It, with such well known soliloquies as “All the world’s a stage” and “Too much of a good thing.” Infuse it with the songs of the Beatles and what do you have? That’s a good question. What do you have? It seems at first glance quite a dicey pursuit for any theater creative to take two cultural phenomena so heavily loaded with expectations and invested with decades of popularity and combine, and therefore change, them to create something almost entirely new. And with Shakespeare and the Beatles at seemingly polar opposites of the artistic spectrum, how would lovers of them both come to accept this unusual treatment?

Those are questions acclaimed director Daryl Cloran had to grapple with when challenged to create a production that did just that, join the music of the Fab Four with Shakespeare’s play, As You Like It. The appeal came after a successful 2015 run of Love’s Labour’s Lost Cloran had mounted at Bard on the Beach in Vancouver, BC. In it, he pulled out nearly half of Shakespeare’s text and replaced it with 1920s jazz standards. Audiences loved it, and the artistic director for the series pitched the As You Like It adaptation in response. Cloran admitted that despite the success of his recent adaptation, he wasn’t quite sure about the project’s chances. But as he told me, “the more I considered it, the more it became clear to me it was a perfect fit.”

​Perfect fit indeed, that is if you consider retooling the play’s setting and period, which Cloran did eagerly once he considered just how congruent the themes of the play were with many of the Beatles’ standards should the story be set in the 1960s. Cloran said that reconsidering each of the characters in a ‘60s context, you could build the world that supports both Shakespeare’s texts and the big musical numbers the Beatles’ biggest hits would create.

Still, Cloran understood the risk involved in this very specific pairing. “People have strong feelings about Shakespeare’s text, and strong personal connections to the Beatles songs,” he told me. Yet every theater critic in Vancouver admitted they were originally unsure of the concept when they first heard of the project, but the sterling production made believers of them all.

​Marsha Lederman of The Globe and Mail wrote, “...at one point, there was an audience sing-along to Ob-la-di, Ob-la-da – the only Beatles song I actively hate, and yet there I was, belting it out with everyone else.” For Marc Robins of Vancouver Presents, it was much the same: “Bring on this crowd-pleasing summer of love. You’re not only going to like As You Like It, you’re going to love it.” Lorraine Graves, Richmond Sentinel, urged, “Go for the humour. Go for the quality. Go for the spectacle but definitely go see ‘Shakespeare in Love’ at Bard on the Beach!”

But what really have you got when you pair Shakespeare’s comedy with the Beatles? Upon closer inspection, Cloran must have discovered an instant synergy between much of the two worlds. Shakespeare’s story, after all, lends itself seamlessly to so much of the angst the Beatles expressed in their music.

The story takes place in 17th century England with the young Rosalind fleeing the persecution of her uncle’s court. She finds respite disguised as a man in the Forest of Arden with her cousin, Celia and encounters a host of diverse and interesting characters along the way. Rosalind also finds love in the person of doleful traveler Orlando, who recites most of Shakespeare’s most iconic speeches. He serves as sharp counterpoint to the other characters, often observing and disputing the hardships of life in the country.

In Cloran’s adaptation, it’s the ‘60s and all you need is love. Rosalind and Celia escape the world-gone-wrong for an opportunity to get back to the land, a place of safety and escape from the corruption of the city. Taking their refuge in the forest, they encounter Orlando, a young lad with much to learn from the woman in disguise.

​With the groundwork laid for time and setting, mapping the iconic songs of the Beatles to the plot of the story was simpler than one might think. Cloran explained, “Some of the songs feel like they were written for this play. For example, at one point Jaque’s (Orlando’s brother) runs on and says, “A fool! I met a fool in the forest!” which makes for a pretty perfect segue into Fool on the Hill. Or Rosalind, in disguise, singing “You’ve Got to Hide Your Love Away,” is such a perfect way to express the challenge that character faces.”

Setting the stage for this melding of two worlds requires a wealth of creativity. With the original Vancouver production, the show ran in repertory with a production of Macbeth. So the set needed to be modular and work for both shows concurrently. But Cloran explains that with a new production at his home theater Citadel Theatre in Edmonton, Alberta and the production coming to Chicago this spring, gave the opportunity to incorporate bright, fun 1960s world with splashes of color, something endemic to the time and the Beatles’ upbeat songs.

​Also necessary for the success of this production is a cast of dynamic actors that can do a bit more than walk and chew gum at the same time. Indeed, Cloran admits, this adaptation asks quite a lot of his cast. “They need to be great with Shakespeare, great singers,” he told me. “Many of them need to be really strong instrumentalists to play the Beatles music, and a number of them need to be able to wrestle as well. It’s a tall order.”

Yes, wrestling. At one point in the play, tensions rise amid debate over the servile conditions that prevail in the larger society, and several of the characters come to blows (or tangles, as the case may be). Cloran explains this scene was one of the most difficult to adapt to his unique production. “The most complicated set element to build or conceive was the wrestling ring,” he explained. “It needs to be sturdy enough to take wrestlers slamming into it and jumping off the turnbuckles, but about 30 minutes into the show, the wrestling ring needs to disappear (as we travel out to the forest). In our Vancouver production the ring was very complicated and required a large team of people to take it apart. The ring in Chicago splits in two and slides offstage on air-casters. All the while the cast is singing the Beatles song ‘Help!’"

When the production, currently at Citadel on a proscenium stage, makes its way to Chicago, Cloran will avail himself of Shakespeare Theater’s long thrust stage in Courtyard Theatre at Navy Pier. This element, he says, offers the opportunity to create his most immersive production yet, and that’s something the director is excited about. After all, offering audiences an opportunity to engage more intimately in live theater is something with which Cloran thrives.  “Theater is such a live, ephemeral art form - it only exists at this moment,” he explained. “ I think more and more audiences are looking for experiences that lean into that live experience.” And this production, with the music of the Fab Five so deftly woven in as a seemingly natural and integral part of the script of one of Shakespeare’s most iconic works, offers audiences a chance to lean into both the music of one of the 20th century’s most iconic bands and the work of the Bard all at once.

That's just one of the reasons there’s really no better chance to engage innovative and inspiring arts and culture this spring in Chicago.

​As You Like It runs at Chicago's Shakespeare Theater April 30 - June 21. Visit chicagoshakes.com to learn more.