​Steppenwolf's new production, Between Riverside and Crazy, is a gritty, raw portrayal of a man at odds with his place in the world. 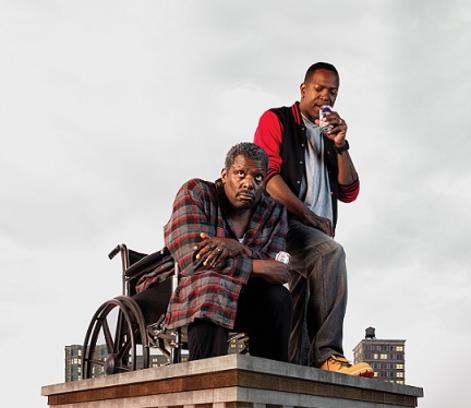 Eamonn Walker and James Vincent Meredith in Steppenwolf Theatre's June production of Between Riverside and Crazy (photo by Saverio Truglia.)

At what moment do successful artists realize they will no longer live hand-to-mouth, paycheck-to-paycheck, gig-to-gig? Does this specific realization even ever exist? The transition from constant hardship to persistent luxury seems obvious to most. For most successes, the rise is well documented, and I doubt anyone would claim to be unaware of the process. But sometimes fame is quite gradual. If too much time passes, that gray transition may result in gradual disconnections between artist and audience. Like a slowly souring marriage, the disconnect between artist and audience is subtle enough to keep the relationship going for a while. But it’s only a matter of time before one side wakes up and wonders if the other really knows what its really like on the other side of that relationship.

So, how does success affect the work of an artist? Even more important is the question of how an artist keeps focus on the struggles of the common man when that artist’s increasing success removes them from that struggle. In the world of music, Bruce Springsteen might  constitute a good example of this. Springsteen continues to spotlight the plight of the working man even after decades of success as a rock star. But how much does he really know or relate to the difficulties of the working man?

​At times, even the theater world struggles with this particular disconnect. Stephen Adly Guirgis has had plenty of success as a playwright. One might presume that he no longer identified himself as working class, if he ever did. Yet his characters seem earthy enough. They live in a world of financial despair, and pretty much everyone is filled with the kind of emotional languish most often felt by the by the poverty classes: hunger, fear of homelessness, a desperate drive to survive. Even in his Pulitzer Prize winning dark comedy, Between Riverside and Crazy, which will receive its Chicago premiere at Steppenwolf Theatre this July, he creates characters that few in his audience would often cross paths with.

The principal focus of this play is Walter “Pops” Washington (played by Chicago Fire's Eamonn Walker), a retired New York City cop who maintains an ongoing lawsuit with the city over a shooting incident several years earlier. But Washington is the shooting victim and another cop is the perpetrator. The location is Washington’s rundown, but valuable, Riverside Drive apartment in New York City. He's lived in his rent-controlled flat for so long that the apartment owners are itching to have him move out or pass-on; they could fetch much higher rent with new tenants. But Washington really doesn’t plan on passing on anytime soon.

During the course of the quick-paced script, several characters come and go. Washington’s son, Junior (played by James Vincent Meredith, Othello at Chicago Shakespeare Theater); his son’s pregnant girlfriend, Lulu; his son’s ex-con friend, Oswoldo; and Washington’s old friends from the police force all spend time onstage. Washington suspects that Junior is only playing caretaker so that he can pounce on an inheritance when the ailing retired police officer finally kicks the bucket. He is suspicious of Lulu's intentions as well and doesn’t really believe she’s pregnant. Friends from the police force try to convince Washington to drop his lawsuit, but he hangs onto this piece of litigation like it’s the last thing giving his life structure—which just might be the case.

These are individuals who have struggled the full compliment of  their lives and find themselves closer to the end than the beginning and wondering what purpose it all served. Creating drama creates substance, and that passes the time. Not that this trait only exists on one socio-economic level, but can established American playwright connect honestly with these kinds of struggles?

The work had its world premiere at Guirgis’ home base, The LABrynth Theatre in New York City. Like the characters in all of his plays, the people who inhabit the world of, Between Riverside and Crazy, speak in an urban vernacular not typically associated with highbrow theater. And that only scratches the surface.

His characters are fraught with addictions, and financial struggles abound. They don’t philosophize about their problems over cocktails; they argue with one another in an attempt to understand themselves.

Are these the kinds of struggles that can readily translate across the fourth wall to an audience like that of Steppenwolf Theater?

When asked that question, director and Steppenwolf ensemble member Yasen Peyankov insisted, “Absolutely! It is a play about family, and those dynamics don't change much across social and racial lines. It is difficult. You don't choose your parents or children. You learn how to find ways to forgive, forget and love each other again.”

​Steppenwolf’s own humble beginnings in a church basement in Highland Park 40 years ago have been well documented, yet the company has only gotten bigger and more celebrated. The honors associated with the Steppenwolf name extend well beyond the theater walls and would seem a world away from the downtrodden personalities and circumstances found in Between Riverside and Crazy.

What made Steppenwolf famous, however, is the same thing that made Springsteen famous: honesty, keeping it real—not just real, but digging deeper than most. One production that put Steppenwolf on the map was their 1982 remounting of Sam Shepard’s, True West. When Shepard presented True West to New York audiences in 1980, he had just won the Pulitzer for Buried Child two years before and had the typically thankless task of trying to follow up a hit. But what made Buried Child so powerful was what the very unusual subject matter of a dead baby buried in a corn field represented: a dark side of America that won’t stay hidden.

After winning a Pulitzer, the world expected more of the same and True West, the story of two brothers—one tame, one untamable—seemed just as gritty. But the response was weak...that is, until Steppenwolf Theatre over in Chicago discovered it and cast John Malkovich and Gary Sinise in the brothers roles.

​Malkovich became what we visualize when we think of Steppenwolf today: gritty, unafraid and a fistful of real. Malkovich would grab his crotch and fall to the ground wailing if that’s what it took to find the honesty in a scene. The production was a hit, and Steppenwolf was the theater that threw the visceral punch that, until that time, laid dormant in Shepard’s script.

​Steppenwolf grew and became more famous yet still maintained that early sense of honesty. But how?

​Many things, no doubt. But one thing, for certain, is the scripts the company chose. The scripts are always different, edgy, tough. The plays of Stephen Adly Guirgis resonated as well as Shepard’s. His characters are urban, streetwise, tough and fascinating. Titles like, The Mothe****er with the Hat, reveal something of what we can expect onstage. But even a play like The Last Days of Judas Iscariot takes familiar biblical characters and puts a modern, urban spin on their vernacular.

And the topic of racially-charged police violence could not be more timely. Peyankov relates, “The backdrop of the play is also inevitably current and, unfortunately very Chicago: a Black man (a cop at that) shot by a White policeman six times. The city is stonewalling the case and trying to make it go away by offering a pitiful amount of money. How do you pay for a life full of social injustice? What is the value? How do you pay for humiliation? How much is your dignity worth? These are all very important issues that the play investigates, which makes it personal and very public at the same time.”

​Questions of dignity, justice and humility, of course, cross all boundaries. And that is barely the surface of what we see in Guirgis’ Washington, an African-American man filled with complexities but also riddled with doubt. One of the strongest personas Guirgis has written for the stage, Washington stands his ground: he will neither give up his apartment nor his principles. He may no longer be certain of them, but closer to the end than the beginning, he is committed to them. The commitment to principles almost overshadows the substance of those principles.

“Being an immigrant myself I relate to the sense of having nothing to lean on, no one to rely on and being one accident away from financial ruin,” says Peyankov. “You have yourself, your sense of self, of who you are, what is fair, what is not and a sense of dignity and integrity that you fight for with every fiber of your being.”

​Of course, you don’t have to be an immigrant to feel these fears or even a resident of Chicago. We all have these concerns. They are not what separates us but what binds us together. And in the world of Between Riverside and Crazy, everyone is invited to connect.

Between Riverside and Crazy runs at Steppenwolf Theatre in Chicago’s Lincoln Park June 23 through July 2.