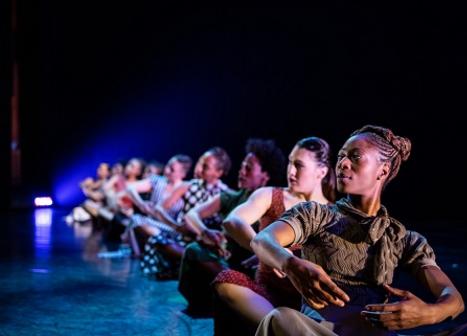 ​DRDT’s Nicole Clarke-Springer begins serving as the company’s artistic director during the 2019–20 season, beginning with these fall performances. Co-Founder Kevin Iega Jeff, transitioning to the role of creative director, is shifting his focus to cultivate the community relationships and funding resources for developing the South Side Dance Center, an initiative announced in 2018, and the development of the new Special Projects Division, beginning with the Donald Lawrence collaboration previewing on the December programs. Jeff will also support Clarke-Springer’s transition by serving on DRDT’s Artistic Team.

As an overall frame for the season, Clarke-Springer has chosen a quote from writer Jeremy Eichler: “The great masterworks of the past not only shaped what came afterward but continue to find their meaning changed retroactively as new works of art reimagine them through the prism of the present.”

“As someone who is a product of the Deeply Rooted process—artist, choreographer, Dance Education director—it is an honor to now serve the company in this capacity,” Clarke-Springer commented. “It is important to me to maintain both the spiritual and artistic integrity for which the company is known as well as create spaces for new voices that not only are inspired by our mission but look to reaffirm it in new and imaginative ways.”

Featured on the program are three works from the company repertoire. DRDT Co-Founder and Associate Artistic Director Gary Abbott’s Parallel Lives (2017) is a contemporary narrative inspired by poor, working women who have shared life-changing events, both beautiful and tragic, with original music by Evangelos Spanos based on Vivaldi’s “La Folia.” Nicole Clarke-Springer’s Forces (2018) explores spiritual influences on daily consciousness, with music by Marcelo Zarvos. When Men (2016), by company and Artistic Team member Joshua L. Ishmon, considers the idea of abandoning stigmas to strengthen from within, with music by Ananda Giri and Paolo Nutini and text by Charlie Chaplin.

Along with DRDT repertoire, the December 14 and 15 performances include Gesem, East of the Nile, a preview of a full-length work, premiering in spring 2020, that brings together DRDT and Grammy Award-winning producer/songwriter/gospel artist Donald Lawrence. This theatrical experience melds elements of choral, hip-hop, trap-jazz, and inspirational music with inspirational dance theater. The December preview features original music by Lawrence, a choral ensemble, and the DRDT dancers.

Special performances for youth and senior audiences Wednesday, December 11 at 10 a.m. and noon feature excerpts from this season’s repertoire.

​Performances take place December 13–15 at the Reva and David Logan Center for the Arts on the University of Chicago campus, 915 E. 60th Street, Chicago.