​The language of art and artists is obviously something that has historically evolved with the societies in which art is created. Seen as a mode of communication, itself, art has often emerged as a treatise on how, why and what we communicate over the centuries. Art today is no different. This summer, the Museum of Contemporary Art Chicago will present a landmark exhibition that explores art and the impact of one of the most swiftly evolving modes of communication and media our society has seen since inception, the internet. I Was Raised on the Internet, is an incredibly immersive and participatory show that examines the impact of the virtual world of the internet on art and the way we experience the world around us. Comprised of nearly 100 interactive artworks spanning from 1998 to the present, I Was Raised on the Internet are culls works from an impressive batter of photography, painting, sculpture, film and video, as well as emerging technologies, interactive computer works, and virtual reality--all speaking succinctly to the new ways in which we perceive the world and how the virtual world has changed that. The exhibition  presents a global cache of artists working in new media platforms like Oculus Rift and social media landscapes like Facebook and Snapchat, looking at culture and 'trending' content and how interacting with the world has actually shifted through constant exchange on the internet.

​Organized by Omar Kholeif, MCA Senior Curator and director of Global Initiatives a the museum, the themes explored in the new exhibition actually have their roots in forms of media and communication considered near ancient by comparison. Kholeif explains that the emergence of the internet and platforms like social media has been a game-changer for how we view the world, and artists are reflecting that in new and exciting ways. Says Kholeif, “I have been working in this field of research for about 15 years now, from my early days as a curator of film, video and new media. I have curated a number of shows on this subject, but for the exhibition at the MCA I wanted to look specifically at how artists have responded to technologies that have emerged since the new millennium. I am interested in how the rise of social media, online gaming, and virtual and augmented reality software tell a story of how the way we ‘see’ the world is changing.”

Kholeif suggests that one of the byproducts of the internet on society is a sharp conditioning for immediacy in everything we do. He explained: “There is an obsessive pursuit for what is ‘live,’ evidenced by the ways that news media and public personalities use social media technologies to instantaneously reveal their thoughts, ideas and personal stories--also the ways in which politics is communicated automatically online. Some of these tendencies began with the birth of television, but with near universal access everyone is able to comment, respond and become a content creator immediately. It is a new dawn for content creation that is immediate and more responsive than ever before.”

​This “instant culture,” if you will, leads to what Kholeif calls "Internet Aware Art" where artists working in a variety of mediums--be it painting, sculpture or photography--can no longer produce work without considering the context of the internet as the “hegemonic mass medium of our time.” But  Kholief points out that acknowledging a swiftly changing environment is not exactly what artists profiled in this new exhibition are concerned with. They are actually looking at the bigger picture within the fast pace of cultural exchange we experience today. “Artists don't usually respond to pace specifically,” he told me. “They are interested in critically unfolding how society uses technology. For example, the artist Amalia Ulman considers how platforms such as Instagram engender particular kinds of performativity. Oliver Laric and Alexandra Domanovic use 3D printing technologies to test the forms and boundaries of how sculpture can be produced today. Jeremy Bailey uses augmented reality software to consider what the future of art might look like: will museums and artworks be something that we can summon on command and have on our very fingertips. So what artists do is they speculate in a way that is thoughtful and that interrogates the media that we all use.”

That interrogation, says Kholief, leads to a new and unique vocabulary in art and art curation, and decoding that vocabulary is a key point of the new exhibition, taking 1998 as a starting point. Fittingly enough, throughout the exhibition, the viewer becomes an active agent, engaging in new forms of technology and participating with the works both in the galleries and the digital works hosted online.

​Highlights of the show include a series of photographs from artist Amalia Ulman's four-month Instagram project, Excellences & Perfections, examining the influence of social media on attitudes toward the female body; an immersive, glowing matrix-like space by Hito Steyerl called Factory of the Sun; a hub connected to a private network by MacArthur genius grantee Trevor Paglen, called Autonomy Cube, in which visitors can surf the web anonymously; and a sculpture and video installation by Simon Denny that critiques the politics of cyptocurrencies, including bitcoin and the economics of the internet.

​I Was Raised on the Internet is organized into five distinct stations called “chapters,” each describing a different mode of interaction between the viewer and the art object in question: The first, Look at Me, explores new, more fluid forms of identity that flourish in a world where social media encourages the continual performance of the self and networking with others; the second, Touch Me, explores the increasing  fluidity of the lines of demarcation between real space and virtual space. traces the extent to which it is possible to translate information and digital images into real space, and addresses the ways individuals are increasingly seeing touch and sensuality as new concepts in the world of the internet; the third chapter, Control Me examines the pervasive culture of surveillance and data collection that network technology enables, considering platforms like Facebook and Instagram, that offer access to their features at the cost of personal data. It explores the visual vocabulary for state control, and asks how that control will develop through new technologies; the fourth chapter, Play with Me, explores how gaming culture has altered the way that we relate to each other. Documenting the progression toward fully immersive and interactive technologies developing today, where the visitor is an active agent in the work; the final chapter, Sell Me Out, considers how the internet has emerged as a corporate sphere and artists expose, critique, and participate in marketing strategies  with a critical eye to the future of buying and selling.

​Accompanying the exhibition are a variety of ancillary events designed to help flesh out some of the exhibition’s themes and lead to further exploration of the concepts it presents. Among them are the curator tour “I Was Raised on the Internet with Omar Kholeif and Jared Quinton,” where the exhibition’s curators will give two in-depth tours of the show expanding on the work in the exhibition and its overarching themes on Thursday, July 28;  Talk: Douglas Coupland with Omar Kholeif, where artist, writer, and coiner of the terms Generation X and McJob, Douglas Coupland chats with Omar Kholeif discussing the ways the internet has changed our experience of the world as well as how the work of artists has morphed in response on Saturday June 23;  and Thursday, June 28; and MCA Prime Time, a unique after-hours museum takeover that taps that employs an eclectic mix of live music, performance art, film screenings, and interactive programs to transform the museum in spectacular ways. This summer the theme is based on the digital world of the I Was Raised on the Internet exhibition, with a GIF party, media lounge, AR/VR experiences hosted by the digital museum of digital art (diMODA), a special installation by Rebirth Garments, DJ sets; and a live performance.

Perhaps, the world has always been a quickly changing place, but with the new forms of media emerging since the millennium, we are all connected in one way or another and able to witness that change at a dizzying pace. I Was Raised On The Internet seeks to slow that pace just long enough for us to observe how it has impacted the way we absorb the world around us, and perhaps in doing so help us to recalibrate how that impacts who we are in the process.

I Was Raised On The Internet opens at the Museum of Contemporary Art Chicago on July 23 runs through October 14, 2018. 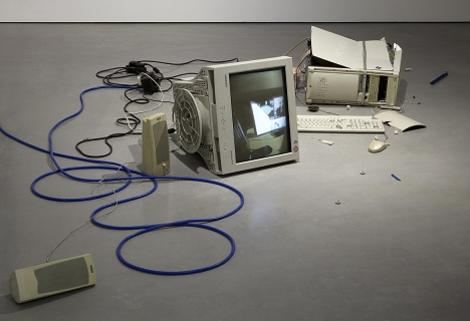