For museum science and scientists, they are the very fibers that help to form the ethos of their world. They are the basis upon which museum research firmly stands, the tools that give us access to worlds of knowledge we could never appreciate without them. They are specimens, and they are the basis of a new and exciting exhibition on view this spring at The Field Museum. Opening March 10, Specimens: Unlocking the Secrets of Life will invite guests to glimpse behind-the-scenes at the venerable museum to see thousands of scientific samples, from SUE the T. rex to tiny beetles. And yet the thousands of wildly diverse specimens on display will represent a mere fraction of the more than thirty million objects in the museum’s massive collections—much of which are tucked away safely behind the scenes, often used in important scientific research.

But what are specimens, really? According to Paola Bucciol, Field Museum Exhibitions project manager, any portion or whole example of a species that we can study, and that’s an important facet to understand. “When we say ‘specimen,’ we mean an individual animal, plant, piece of a mineral, etc. used as an example of its species or type for scientific study or display,” Bucciol explained. “In the exhibition, visitors will see that specimens come in all forms, shapes, sizes, and preparation types—from drawers full of pinned ants, to herbarium sheets, to a whole elephant skeleton. All of these are some examples of the specimens in our collections.”

And vitally important is the fact that each of those examples in The Field’s immense collection represents a kind of window into the past that we will never again have the chance to recover. That’s why when Field Museum scientists gather a specemin, they recover as much of it as is possible. It’s also why the museum’s collections have been relied upon by scientists from across the globe to help shape scientific research in key and unexpected ways. Explains Marie Georg, Specimens’ lead developer, “When our scientists collect a specimen, they don’t know all of the ways it’ll be used in the future. We have gulls in our collection that were used to determine that mercury levels in the oceans have been rising over time. We have minerals that researchers analyze and compare to the chemical makeup of meteorites so we can learn more about the origins of our planet. When these specimens were collected—last year, in the 1950s, or the 1890s—scientists could have scarcely imagined that they’d be used in these ways.”

This new exhibition features examples from all of The Field Museum’s scientific collections, from mammal and bird skins, to pinned insects and elephant bones, to fossils and “cleared and stained” amphibians, the diversity and sheer number of artifacts guests will have access to is staggering. Through the variety of specimens displayed, the exhibit shows just how these collections are taken care of, studied on a daily basis, and how they keep growing. Specimens also explores why the museum collects so many of the same things. With more individuals of the same species (in many cases collected over time), the museum is able to expand our understanding of topics like evolution, climate change and extinction. And because don’t yet—and can’t predict—how they will be used in the future, we can never know what kind of discoveries they will yield in the future. As technology advances, even the oldest specimens can reveal new and important information.

Taking on the task of selecting the comparatively few specimens to represent the collection from the vast number of artifacts in the museum’s holdings was an enormous task in and of itself. The Field’s exhibitions development team visited the various collection managers and curators around the museum responsible for each and every one of its collections. After querying and brainstorming to tease out important themes for the exhibition, some important aspects representative of the museum’s collection began to emerge and the development team worked to narrow and sort ideas into themes that made sense for the exhibition. Asking scientists to point out aspects of the collections they would want to show visitors that they haven’t yet had the  chance to yet yielded a wealth of objects. And those that were visually interesting, fit into one of the major themes of the show and pointed to science that would be approachable for the public generally made the cut.

Among the amazing objects in The Field’s collections, visitors to Specimens can see a giant clamshell (that they can touch), a nearly six-foot-long sawfish snout (or “rostrum,” to use the technical term), and a drawer full of now-extinct butterflies with silvery-blue wings. Guests can also try their hand at sorting seashells into different species and walk into a reconstructed map-lined office of a long-time Field curator. (He glued dots on the maps to indicate the locations of water beetles.)

An interactive touch-screen encourages visitors to explore ancient insects—millions of years old—trapped in amber. (Remember Jurassic Park? Instead of extracting DNA to resurrect long-dead dinosaurs, scientists take micro-CT scans of the insects to learn more about their biology.)

The Field Museum’s scientific collections are unquestionably among the best and largest in the world. Year after year, hundreds of researchers from more than 60 countries travel to Chicago to study Field specimens, which include over 80,000 type specimens. Additionally, thousands of those specimens are loaned to other research institutions to broaden their own learning. As part of this global network, the Field contributes to untold growth in global scientific knowledge thanks to its ever-growing collections and the active research that happens every single day in the collection spaces and labs of the museum.

“Lots of people don’t realize that we have collections behind the scenes—let alone collections numbering over thirty million objects—and that the museum is an active research institution where scientists work and make discoveries based upon these collections,” says the museum’s director of Exhibitions, Jaap Hoogstraten. “Specimens will help share those stories.”

Says Hoogstraten, “Museum collections are a way to preserve the past so that we can learn from it in the future. If you have a specimen of a water beetle from Mexico collected in 1897, that’s a little window into the past. You can never go back to 1897 Mexico, so having a specimen from that time and place is the only way for scientists to learn about it. That’s why our collections are invaluable.”

Specimens will run at The Field Museum from March 10, 2017, through January 8, 2018. It will be included in Discovery and All-Access pass admission. 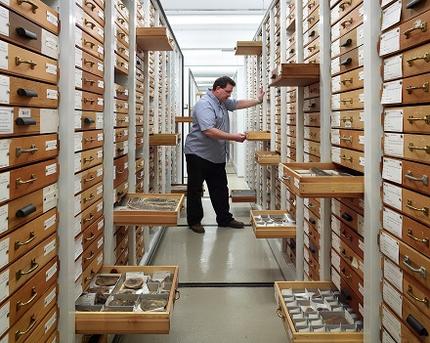