New exhibition at The Art Institute of Chicago brings together, for the first time in North America, the three works considered among the most personal to Vincent van Gogh, The Bedrooms, revealing the artist's dearest and most beloved space, and exploring the motif so prevalent in his work and thoughts throughout his life and career. 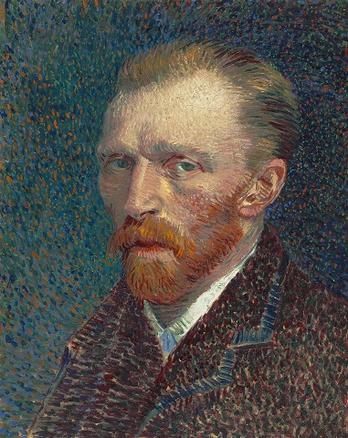 If you think about the most personal of places one can imagine to learn about an artist, it’s home. And of the home, the most personal of spaces may quite possibly be the bedroom, one of the most intimate of spaces, often a place of rest, recuperation, quiet contemplation and peace. It’s the one space that inspires and rejuvenates the mind, body and soul. It’s that space from which Vincent van Gogh gleaned such muse that he dedicated a profound series of works to. Those works are the subject of a new exhibition at The Art Institute of Chicago called Van Gogh’s Bedrooms, on view at the museum this spring.

Featuring nearly 36 works by the artist, including paintings, drawings, and illustrated letters and a selection of books and other ephemera known to have been in Van Gogh’s possession, Van Gogh’s Bedrooms is a dynamic exploration of the great master’s fascination with the concept of haven. His use of the motif of home can be traced back to his early canvases of cottages and even the nests of birds, demonstrating the unique potency that home held for the artist.

Van Gogh painted his first Bedroom shortly after moving into his “Yellow House” in Arles, France, in 1888. The work meant so much to the artist that after it suffered water damage, he became determined to paint a second version while at an asylum in Saint- Rémy  in 1889. The original is currently part of the collection of the Van Gogh Museum in Amsterdam.

Similar in scale but also unique unto itself, the second work remains one of the iconic works of The Art Institute’s permanent collection. Van Gogh even painted a smaller third version of the work, now part of the Musée d’Orsay in Paris. He gave the work to his mother and sister just a short time after creating the second. And while the three paintings at first appear nearly the same, a close examination reveals distinct and unique details that separate them in many ways.

Van Gogh’s Bedrooms is the first exhibition to truly examine the fascinating history of these three historical paintings. Beginning with those early canvases exploring homes and havens of disparate kinds, the show explores the artist’s use of the motif of home—as creative chamber and physical reality—and it follows the theme’s evolution throughout Van Gogh’s career, beyond the "Yellow House" to the asylum at Saint-Rémy.

The exhibition’s journey ends with Van Gogh’s final residence in Auvers-sur-Oise. It was there that the artist returned to works focused on cottages, the idea that first inspired in him a sense of home. This exploration—presented only at The Art Institute of Chicago—brings together all three versions of The Bedroom for the very first time in North America, presenting a pioneering and in-depth examination of their creation and relevance to Van Gogh in his unending search for home.

Van Gogh’s Bedrooms offers unique insight not only into the artist’s own muse but questions that have persisted for years about the historical context of the creation of these inspiring works. Without the cooperation of the three museums that held the three individual works in the series—Van Gogh Museum in Amsterdam, Art Institute of Chicago and Musée d’Orsay in Paris—these answers might not be possible. As Gloria Groom, Chair of European Painting and Sculpture and David and Mary Winton Green Curator for the museum, told me, collaboration was key to gleaning the insights Van Gogh’s Bedrooms has revealed. “Van Gogh’s Bedrooms began as a collaboration between the curatorial and conservation departments of the three museums,” Groom explained. “Before this partnership, details of the three versions’ histories were still not fully understood, even something as essential as whether the Amsterdam and or the identically-sized Chicago Bedroom was painted first. With three separate teams working independently and each only studying one version, such basic questions continued to go unanswered until now. Using cutting edge technology, today we have a greater understanding about Van Gogh’s different process for applying paint to each canvas, the different pigments he used, and the different environments in which these paintings dried.”

As a result of this close examination, Groom told me, curators can now say definitively that the Amsterdam Bedroom was painted first, the Chicago painting second, and the Paris version third. The process of discovery that yielded this insight was comprised of significant art historical and scientific analyses, but this presentation of the series under one roof will allow for visitors of the new exhibition to have their own in-depth experience and discover new details and distinctions not possible before.

Many of those distinctions are painterly, artistic aesthetics. But others are the result of inspiration and circumstance. These distinctions reflect not only Van Gogh’s artistic process but his life and times as well. Groom explained, “Van Gogh created the first version (Van Gogh Museum, Amsterdam) just after moving into his "Yellow House" in Arles in 1888. He made this painting in a moment of profound optimism, as he expected his friend, artist Paul Gauguin, to join him and found a "Studio of the South." So important was The Bedroom that, after water damage threatened the painting’s stability, Van Gogh was determined to preserve the composition. However, by this time his circumstances had changed substantially: his tempestuous time living with Gauguin had ended with his own mental breakdown and hospitalization.

In September 1889, while a patient in the Saint-Rémy asylum, Van Gogh painted a second version (The Art Institute of Chicago). The second Bedroom… reflects how the artist now regarded this composition as a nostalgic image of unrealized ambitions.”  In the artist’s third and smaller version (Musée d’Orsay, Paris), which he gave to his mother and sister, there is clearly a more personalized composition suitable to their space and their own collection of his other paintings.

Of his many Bedrooms, Van Gogh recorded in paint only the one from the "Yellow House," but the themes of refuge and haven were constants in his art before and after Arles.

Van Gogh is one of the most well known and sensationalized artists of all time. As the subject of melodramatic film pieces and sometimes lurid presentations about an artist in conflict with himself and others around him, our understanding of Van Gogh, the person, is quite often given to lurid interpretation. But, as Goom explained, “Van Gogh’s Bedrooms, focuses much of its attention on the very human, universal side of Van Gogh—someone constantly searching for a place of belonging—and how his quest for a home influenced his art and vice versa. Using the artist’s own eloquent words, the presentation will also reflect Van Gogh’s thoughtfulness about his own works, the art that inspired him, literature and contemporary culture.” And in the process, it give us one of the truest pictures of an artist whose image has so often been distorted.

Enhancing the exploration of Van Gogh’s Bedrooms, are several engaging interactive presentations at the Art Institute. A digitally enhanced reconstruction of his bedroom will allow viewers the chance to experience Van Gogh’s state of mind and the physical reality of the space that so inspired him, while other digital presentations bring to light significant recent scientific research on the three Bedroom paintings themselves.

The full compliment of exhibits and programs presented in association with Van Gogh's Bedrooms offers an innovative yet intimate look at one of the most beloved and often-misunderstood artists of all time.

Visit Van Gogh’s Bedrooms currently on view in the Art Institute of Chicago’s Regenstein Hall through May 10, 2016. Visit artic.edu for more details.