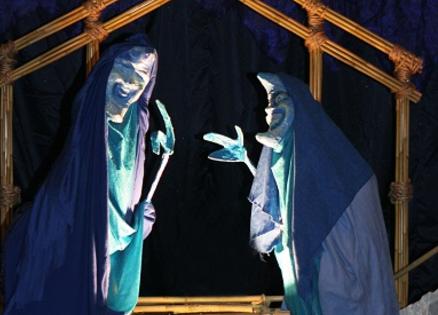 This December Quest Theatre Ensemble's production of the Chicago favorite, Blue Nativity, will celebrate 15 years charming Windy City audiences. The family-favorite Christmas celebration features visually arresting large-scale puppetry, soaring music and the greatest story ever told. Embraced by many as a holiday tradition, Blue Nativity tells the story of Christmas and the birth of Jesus Christ with beautiful large-scale puppetry accompanied by live music. Visually arresting and appropriate for audiences of all, Blue Nativity breaks the mold of typical holiday productions, portraying the revered and familiar Nativity story with original puppetry and music that dazzle in creating an enchanting holiday experience. The ensemble cast, sings folksongs and classic carols as twelve-foot blue moon puppets bring the story to life visually.

​Quest Theatre Ensemble’s artistic director, Andrew Park says of the show, “Thematically, the (Blue Nativity) is a gentle reminder that simple light can rise from complicated darkness,” The show has been performed throughout the Midwest, and as part of a Concert for Peace in Gengenbach, Germany in 2007."

​Park adds, "It's hard to believe that Blue Nativity is turning 15! This was Quest's first show, and it's incredible that it's still going strong after all of these years.”

All performances in this production are free, though donations to the theater are accepted. No reservation is necessary.  Park conceived and wrote Blue Nativity, which is directed by Kirk Osgood.

There will be a final special performance of Blue Nativity this season on New Year’s Day at 5 p.m. at St. Gregory the Great in Andersonville (5535 N. Paulina). The special performance will include a post-show reception with free food, raffle prizes, and music at Quest’s resident space The Blue Theatre at 1609 West Gregory, Chicago, IL 60640.