Securing its reputation as the definitive production of Leonard Bernstein’s massive musical Mass, Ravinia’s July 20 command encore presentation, which requires the talents of 200 artists on stage, will be taped for a national television special to air in 2020. The television production team is led by Emmy and Peabody Award–winning executive producer Samuel J. Paul (Live from the Met, The Kennedy Center Presents, American Style), producer Bernhard Fleischer, and director Michael Beyer. Ravinia President and CEO Welz Kauffman, who was named Chicagoan of the Year for 2018 by the Chicago Tribune for his programming that celebrates the Bernstein centennial, also serves as executive producer. Broadcast details will be forthcoming.

Last summer, the first performance of Mass for both Ravinia and the Chicago Symphony Orchestra won public and critical acclaim.

“Every once in a while, you experience a live performance that connects so beautifully that you dread it being lost to the ether after that single performance—especially when it’s something so rarely performed because of the resources it requires,” Kauffman said of Ravinia’s extensive schedule, which offers a different program almost every night. “I just couldn’t let that happen with Mass. It took a bit of doing, but I was able to bring back all the principals who made our presentation so spectacular, and then secured the funding and the talented filmmakers who would make sure this work lived on forever, not for one night.”

​Audiences who attend the July 20 performance starring Tony-winning baritone Paulo Szot with the Chicago Symphony Orchestra, conducted by Marin Alsop, may be part of the action for the special and its accompanying “making of” documentary that will include audience reactions. The one-night-only performance begins at 8 p.m. Jamie Bernstein, Leonard’s oldest child and author of the best-selling memoir Famous Father Girl, will be available to sign copies of her book.

​“Practically everyone knows West Side Story and On the Town, but one of the best results of my father’s centennial was the attention it brought to his lesser known works,” said Bernstein. “Mass, Leonard Bernstein’s ambitious, visionary theater piece for singers, players, and dancers, received a gratifying boost in performances during the centennial celebrations—including the rapturously received one at Ravinia last summer. I was there: Marin Alsop’s masterful conducting of the CSO and the additional enormous forces—combined with Paulo Szot’s shattering interpretation of the Celebrant—made this a Mass I will never forget. So I was thrilled when I heard that Ravinia had decided to remount it this summer—and this time, there will be a television special too! It’s the best news of all that so many people will be able to experience this indelible performance of a piece that embodies more of my father’s multifarious personality than any other composition he ever wrote.”

Appearing with the CSO will be the choral ensembles Vocality and Chicago Children’s Choir, conducted by Josephine Lee; the Highland Park High School Marching Band, led by Joshua Chodoroff; and two dozen actors, singers, and dancers, who compose the “Street Chorus.” Mass is directed by Kevin Newbury and choreographed by Melissa Mahon. Leslie Stifelman is the music supervisor, Victoria “Vita” Tzykun is the scene designer, and Paul Carey is the costume designer. Nevin Steinberg, who won a 2019 Tony Award for his work on Broadway’s Hadestown, is sound designer. Bernstein wrote the music and the text, with additional text and lyrics by Stephen Schwartz (Wicked, Pippin, Godspell) and contemporary “letters” written by the cast.

​As the story of Mass unfolds, members of the Street Chorus find themselves in an existential quandary, wondering how they can believe in and coexist with God and the world seemingly blind to their plights. They address these social issues in the form of letters. Kauffman saw the use of such letters as an opportunity to involve the students of Ravinia’s Reach Teach Play education programs in the year’s biggest undertaking with The Mass Letters Project. Ravinia charged the kids to write letters of their own to share what’s on the minds of today’s young people as they look at the issues facing our world, our country, their community or school, or their families. These letters will be compiled in a booklet to be presented to all audience members at the concert.

One example comes from 8-year-old Diego Martinez, who wrote, “I think a problem in the school and community is bullying. Kids push the person that they are bullying, and they are probably making fun of the kid’s name. Kids need to treat the other kids how they want to be treated. Kids need to understand everyone is unique and special. Maybe we can have a Day of Kindness. The Day of Kindness is about your bully and you. You can play a game with your bully or share a book. It doesn’t cost anything to be kind.”

​Mass, commissioned by Jacqueline Kennedy Onassis for the grand opening of the Kennedy Center in 1971, is the centerpiece of Ravinia’s multi-season celebration of what would have been the 100th birthday of Bernstein, largely considered America’s most important musician. This summer’s highlights include the CSO performing the scores live to the films West Side Story, July 12, and On the Waterfront, Aug. 9; the CSO concert Leonard Bernstein: Man for All Music, featuring songs, symphonic works, and stories about the composer from Jamie Bernstein, Alsop, and young musicians, on July 27; two performances of the one-act opera Trouble in Tahiti, which reteams Szot with Grammy-winning mezzo-soprano Patricia Racette, on Aug. 22; and Ravinia’s first full production of the musical comedy Candide, featuring The Knights, on Aug. 28. Earlier this season, Ravinia presented Concert Dance Inc., with Kauffman at the piano, performing its original choreography on Bernstein’s arrangement of Copland’s popular orchestral showpiece El Salón México; as well as singers from the festival’s summer conservatory, Ravinia’s Steans Music Institute, and poets selected by The Poetry Foundation performing Bernstein’s American Bicentennial masterpiece Songfest.

On July 23, Ravinia will open its new Winnie and Bob Crawford Foyer Ravinia and Associates Board Gallery with the Grammy Museum’s Bernstein Centennial exhibit, featuring such artifacts as the conductor’s wooden baton, his childhood piano, notated scores, costumes, and interactive displays. Admission to the gallery will be free to concertgoers from the time the park opens until that evening’s concert begins.

​​Pavilion tickets for the event are only $25. Lawn tickets are $15 or free to children and students through college. The production will be shown on a giant video screen on the lawn. Tickets are on sale now at Ravinia.org.

Paulo Szot is the Celebrant in Ravinia's presentation of Mass by Leonard Bernstein (photo by Patrick Gipson). 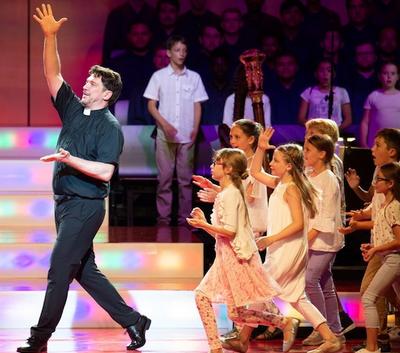