June 21, 2014—Electronic music vibrated from the Civic Opera House as theater-goers approached from the rain-splattered street outside. Inside, a crowd of mostly young adults, relaxed with drinks, posed for selfies in mirrors that featured life-sized decals of the night’s performers: world-famous B-boy crew, The Flying Steps. The club-like atmosphere invading the regal opera house proved a fitting prelude to an evening of stark contrast, as some of the world’s most talented break dancers displayed their extraordinary skills to the music of Johann Sebastian Bach in Red Bull Flying Bach.

Although you may not expect it, Bach’s Well-Tempered Clavier, Part I provides appropriately mathematical, measured music for breakdancing. In Red Bull Flying Bach, each dancer visually articulates one of the instruments or voices in Bach’s work. Meeting the tempo changes, break dancers move, at times, as though pushing through molasses, while at other moments they astonish with the speed of their steps.

The Flying Steps will shock you with their superhuman feats of strength, balance and timing. As if defying the constraints of the human body, the Flying Steps perform countless “freezes,” balancing on a hand, an arm, a head, or a chest, and seemingly endless rotations balancing only on the head, and gaining speed through the spins. Dancers hurled their bodies at the stage floor only to bounce back again, as though wrapped in rubber. At times, their feet look like propellers, flying through the air as they balance on their hands or heads, while keeping the beat at all times.

Classical dance is woven in through the presence of Anna Holmström, who presents a kind of “control” for the experiment of setting non-classical dance to Bach. Holmström, the only female and only non-breaking dancer, provides a striking juxtaposition against the Flying Steps men.

While much of the music is pure Bach, performed live on piano and harpsichord, the audience is also treated to a variety of Bach “remixes,” featuring both breakdance and classical movements. The program transitions from The Well-Tempered Clavier, to the dramatic Toccata and Fugue in D-Minor, during which the dancing swells to a climax before the lights dim on the final scene. After a hearty round of applause, with the audience on their feet, the Flying Steps treated us all to a exhilarating dance battle, in true b-boy fashion. 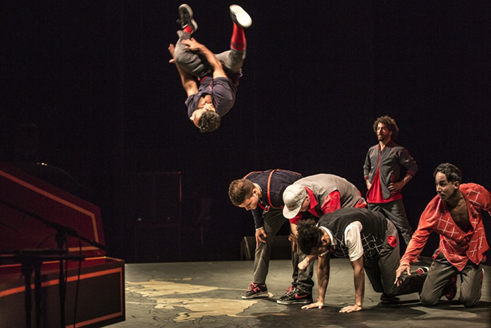