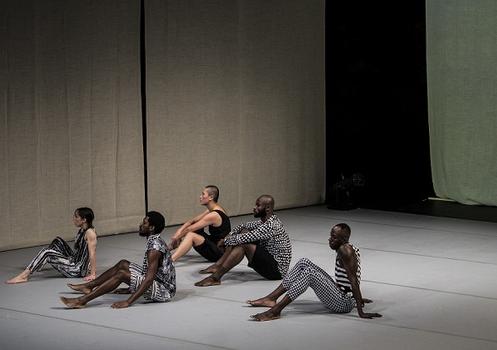 PROVOKING THOUGHT
Acclaimed Choreographer Reggie Wilson returns to The Dance Center of Columbia College this fall with a new work that asks timely questions and perhaps unveils some difficult truths.

Returning to The Dance Center of Columbia College Chicago for the third time, Reggie Wilson Fist and Heel Performance Group will present its new work, Citizen, this October. The Brooklyn-based dance company regularly presents its work in a rigorous national touring schedule. It was last seen in Chicago at High Concept Laboratories in 2015, in addition to their appearances at the Columbia College Dance Center. The company’s tag line, “Not your Mama’s Post-Modern Dance Company,” says a lot in introducing the company as a fresh, and loud voice in the current fabric of post-modern dance. With the its namesake, Reggie Wilson, at its helm, the company promotes a mission to, “create, research, develop and present new performance work that investigates the intersections of culture and movement practices.” True to form, Citizen explores ideas about belonging, through movement, projections and music.

While some may view the work of the company as “statement-making,” and in today’s political climate, necessary, Wilson explains, “I don’t think about that. It’s necessary to me because I’m obsessed about an idea. I’m not trying to make a piece because of the political state of the U.S., or North America or the globe. I like to think if I’m thinking about something, that there’s some relationship to that.” This sentiment lends to an authentic dance experience that thoroughly, and thoughtfully, explores the ideas of Citizen. Audience members will have a chance to hear these thoughts and more from Wilson as he takes part in a panel discussion at Northwestern University, as well as open pre- and post-performance talks at Columbia College this fall. The company hails its work as "rigor, structure and craft in a postmodern dance vernacular,” and this claim is echoed in Wilson’s robust reading list included on the company’s website and within the program notes for Citizen.

While supplemental reading is not something that many choreographers suggest, or typically encourage with such insistence before a performance, audiences can indeed heavily enhance their experience for the coming performance if they so choose to do their homework. Included on the reading list for Citizen are works on the technique of the craft, like Dancefilm – Choreography and the Moving Image, by Erin Brannigan, and Early Jazz: Its Roots and Musical Development, by Gunther Schuller. Other works are included (more specifically about the subject matter in Citizen) like Paris Noir – African Americans in the City of Light, by Tyler Stovall, and Together Let Us Sweetly Live - The Singing and Praying Bands, by Jonathan C. David. Even just a short perusing of the titles and thoughts by Wilson, included on the website, lend a more comprehensive view of just how much research goes into the work audiences will see on the Dance Center stage.

Citizen, premiering in 2016 at the Philadelphia Fringe Festival, was inspired by a trip Wilson made to Paris—and a subsequent trip to Versailles—in which he was looking for a painting he had heard about. The portrait of Jean Baptiste Belley plays an important role in the piece as it appears twice. Belley, a Senegal native, was sold into slavery at age two, but later went on to become the first black deputy to serve in a seat at the French National Convention. He also played vital role in the proceedings to abolish slavery in France. The portrait Wilson speaks of as his inspiration was painted by Anne-Louis Girodet de Roussy-Trioson and was exhibited in Paris at the time of its creation. It has since been interpreted several ways by contemporary viewers and continues to be an important representation of the tensions of the time. The portrait depicts Belley, in the traditional uniform of a Convention member, casually leaning against a bust of philosopher Guillaume-Thomas Raynal, who had recently died at the time the painting was made. Raynal had been a supporter of the abolition of slavery.

If Chicago audiences want even more extra credit on their homework for this performance, a drawing of the portrait in ink and black chalk is housed at The Art Institute of Chicago. Wilson says that the viewing of this portrait actually triggered the creation of Citizen as he fully explored its meaning in history. “The viewing of that portrait, as well as thinking about African Americans in Paris…and things connected to the portrait; who (Belley) was; that it’s housed in Versailles..” explains Wilson, were the beginnings of inspiration the choreographer gleaned from the portrait for the new dance work he would create.  Citizen reflects the human desire to belong, as inspired by Belley’s journey in France. Wilson explains that that inspiration stimulated key questions for him: “How is my experience as a Black, 48 year-old male in America compared to a black 30 year-old male,  or a 23 year-old black male’s experience/reality of America, different? What makes our experiences different, race, class, religion, gender, location, ancestry, language…? Do I change to belong?”

While Wilson explores these questions from personal curiosity, they speak loudly to an ever bubbling, and constantly present narrative in today’s society, making this work incredibly culturally relevant in today’s political climate.

Once the inspiration for the piece had started the ball rolling, Wilson explained just how the actual creation of the work proceeded, “I’m the choreographer. I create the majority of the material. I don’t use improv in the creative process or in the performance.” So the work is purposefully crafted, and specifically choreographed.

As a pick-up company, the dancers are scheduled per project, which means that they come together to incubate a particular idea specifically for Wilson, as is the case with the Citizen cast. “Specifically for Citizen, I was excited to go back into the studio to work with some of the dancers, some of whom I’ve worked with for as long as 10 years. I was responsive to whom I knew them to be, what I believed their talents were, also thinking about what their challenges might be and how I might provoke them,” Wilson explains. The work is movement heavy and rhythmical, featuring black and white costumes by Enver Chakartash and a cast of five dancers. Video projections with collaboration by Aitor Mendilibar will make the black backdrop of the Dance Center come alive on white projection screens placed throughout the performance space. Those projections appear to intrude beyond just the screens, onto the floor, the walls and the bodies of the dancers themselves.

Wilson’s company contributes two tracks of music and uses sound samples to create music that has “a rhythmic propulsion...all from African Diaspora.”

Prepare to be absorbed into the experience. It’s immersive and one you won’t soon forget.