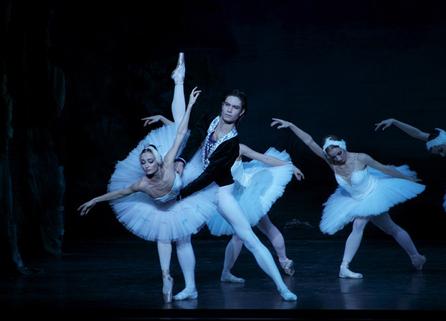 Russian National Ballet in Swan Lake (photo courtesy of MacAninch Arts Center at the College of DuPage in Glen Ellyn).

Russian National Ballet Theatre will bring one of one of the most cherished classical ballets of all time, Swan Lake, to the McAninch Arts Center (MAC) on Sunday, Jan. 15 at 2 and 6 p.m. It’s a production The Washington Post calls “a cut above many of its rivals… the real thing." This engagement is part of a 2017 four month coast-to-coast tour of the United States.

Fifty leading dancers from across Russia, majestic costumes and stunning choreography will converge for this ballet retelling of the mysteriously dark fairy tale of good vs. evil, in this case, capped with a triumphant conclusion. The double role of Odette, the white swan, and Odile, the black swan, is one of the most challenging for ballerinas, and the pas de deux of Acts II and III are anticipated highlights of every performance.

In the familiar story, Prince Siegfried, coming of age, must choose a bride to enhance his power. Walking through the royal woods, he encounters a flock of enchanted swans and learns that only his love can break the curse and return the birds to the beautiful maidens they once were. He meets one such maiden, Odette, and vows to restore her humanity and marry her. True love meets impediments, of course, cast by a sorcerer, Von Rothbart, who beguiles Siegfried with his evil agent, Odile, nearly thwarting the prince’s return to Odette, and magic envelopes the entire tale.

​The full-length ballet in four acts of Swan Lake debuted at the Bolshoi in 1877 with choreography by Marius Petipa and Levi Ivanov, with additional choreography and staging by Kryna Kovalova, performed to a soaring score by legendary Russian composer, Pyotr Ilyich Tchaikovsky.

The Russian National Ballet Theatre was founded in Moscow during the transitional period of Perestroika in the late 1980s, when many of the great dancers and choreographers of the Soviet Union's ballet institutions were exercising their new-found creative freedom by starting new, vibrant companies dedicated the timeless tradition of classical Russian Ballet but with the desire to invigorate this tradition as the Russians began to accept new developments in the dance from around the world.

The company, then titled the Soviet National Ballet, was founded by and incorporated graduates from the great Russian choreographic schools of Moscow, St. Petersburg and Perm. The principal dancers of the company came from the upper ranks of the great ballet companies and academies of Russia, and the companies of Riga, Kiev and even Warsaw. Today, the Russian National Ballet Theatre is its own institution, with more than 50 dancers of singular instruction and vast experience, many of whom have been with the company since its inception.

Russian National Ballet Theatre’s production of Swan Lake comes to the McAninch Arts Center, located at 425 Fawell Blvd on the campus of College of DuPage, Sunday, Jan. 15 at 2 and 6 p.m. Tickets are $56 ($46 for youth). To order or for more information call 630.942.4000 or visit at AtTheMAC.org. Prior to the 6 p.m. performance, there will be a free MAC, which begins at 5 p.m.