Family squabbles are often quite complicated, so much more the case when they involve two royals vying for the throne of England—one well ensconced in her position of rule and the other scratching at the throne from behind the walls of captivity. Such is the story behind Peter Oswald’s riveting new take on the famously bitter rivalry between Mary, Queen of Scots, and her cousin, Elizabeth I, Queen of England. Oswald’s adaptation of the original nineteenth century drama by Friedrich Schiller is a taut and visceral work that lays bare the struggle in which these two fiercely independent royals engaged. The dialogue is sharp and the pace is quick, creating an effect as jarring as any political intrigue on stage today. This spring, Chicago Shakespeare Theater is mounting a production of Oswald’s adaptation with acclaimed director Jenn Thompson at the helm (in her Chicago directorial debut). Former artistic director of The Actors Company Theater (named “Company of the Year” by The Wall Street Journal), Thompson, a decorated veteran director, is quite familiar with the kind of struggle staging Mary Stuart presents.

At the crux of the play is the battle for power between Elizabeth and Mary. Having recently become aware of a secret plot to kill her and take the throne by familial ascendancy, Elizabeth imprisons her cousin, and the plot’s seemingly obvious author, Mary, Queen of Scots. While grappling with the mounting pressure to execute Mary from the largely male collective of advisers behind her, she also must wrestle with the knowledge that her cousin's continued existence contributes to the instability of her reign. And Mary must trust the men who work tirelessly behind the scenes in an ever growing and surreptitious network of supporters to realize a plot to help her seize power.

Oswald’s Tony and Olivier Awarding-winning adaptation of the work first premiered at the Donmar Warehouse in London, where it enjoyed brisk ticket sales and critical acclaim. After which, it moved quickly to the West End and to Broadway for extended runs. Variety called the work, “no stodgy history lesson but a juicy regal smackdown rendered in direct, muscular language.”

No stranger to such gritty productions of complex drama, Thompson welcomed an opportunity to sink her teeth into Oswald’s work. And it was in the expediency of his dialogue that she found a context for her production. “The Oswald text is both beautifully and economically written. There is a clear musicality and poetry in it, but with an accessibility that doesn’t require us to do any extra work to hear it,” Thompson told me. “The take away is surprisingly contemporary—which has influenced a lot of other decisions about the production including design, casting, et cetera. It’s a rather muscular, visceral type of read. It jumps off the page and leaps out of peoples’ mouths in a very immediate way.”

That immediacy has become an apt touchstone setting the stage for the play’s climactic scene, the meeting between Mary and Elizabeth. Though it never really took place, this imagined clash of English royal titans is one that is layered with complexity. On the one hand, you have Elizabeth, drenched in political power, yet limited as much by moral barometer as public scrutiny; on the other hand, you have Mary, whose fanatical following grows more and more potent every day, yet she understands she is still constrained by the precarity of her situation: one false move, and she’ll relinquish her head to pay for it.

Staging such an electric scene on the live stage poses its own challenges, Thompson admits, yet she knows it represents a satisfying moment in both the play and the lore of the epic family squabble. “It’s a great opportunity for both actresses and audiences,” Thompson explained. “Not only have Mary and Elizabeth been primed for decades to collide, so has the audience—whether they are familiar with the history or just enjoying the play.” This priming helps to set an important context for the climactic scene, Thompson says. But further support is also advanced by the architecture of Oswald’s adaptation. In the first scene, Oswald gives the audience a glimpse into the world of the embattled monarch, and shortly thereafter we get a sense of Mary’s world—a rather agnostic approach to both sides that not only prepares the audience for the climactic meeting, but allows for a more unbiased exploration of the merits of their individual struggles, eliminating the expected protagonist-versus-antagonist bent, and allowing the audience the gift of real discovery as the characters unfold on stage in front of them.

Thompson insists that element of this famous battle evaded her at first glance, but as she delved deeper, she began to see a real balance in the handling of these two very powerful, yet vulnerable women. She explained, “Initially, it certainly felt like it was Mary’s story, to me—after all, she’s the title character. But the more I’ve worked on it, the more I’ve come to feel that the play is exceptionally even-handed regarding these two monarchs. A good play will do that: it seems to be one thing, and as you work on it, more and more layers are revealed. Good actors will open up all kinds of possibilities. I don’t think Schiller or Oswald have taken sides, and neither have we. These are fully fleshed out, complex women with strengths and flaws. I’m hoping it invites some good, heated debate.”

And though Thompson sees no real heroine in Mary Stuart, she also sees no ambiguity in Oswald’s adaptation either. She views the arguments the play makes quite clearly and succinctly, that the characters are two conflicting sides of one coin and that at the end of the day, they “simply want to be heard and validated.”

To that end, Thompson has cast two uniquely talented actresses to portray the dueling heroic leads, who are both complex and yet wide ranging in emotion and authority. “On the most basic level, Mary is the fire and Elizabeth the ice,” Thompson explained. “But I knew from the start that I needed actresses that could bring a whole range of complex emotions to these roles, to keep us clear of the stereotypes even the male characters in the show cast them in. It would be easy, and rather lazy, to portray Elizabeth as the bad guy—a monster, but I have a lot of sympathy for her, and I knew Kellie Overbey had both the authority and the vulnerability I wanted to tap into. Her Elizabeth is alive with contradictions; and at times, it’s hard to know whether it’s craft or impulse driving her actions. I love that.

“K.K. Moggie has a gorgeous warmth and spirit to her, but she is also a super smart actor who brings as much head to a role as she does heart. This Mary is nobody’s patsy, and while she ultimately cannot avoid her fate, we watch her throughout the play use all the tools she has in an effort to win her freedom. K.K.'s Mary is a cunning as she is charming, and that should keep everyone on their toes.”

Though her characters were as different as fire and ice, Thompson did see a real value in exploring their similarities in the scenic design choices she would make for this production. She explained that she and set designer Andromache Chalfant searched for ways to emphasize what was similar about Mary’s and Elizabeth’s circumstances, rather than concentrating on their differences. Though one was in prison and the other on the throne, both, Thompson told me, were “imprisoned by their crowns, their gender and the men who tried to control and manage them.” To underscore that point, she and Chalfant cultivated a staging environment that was often “masculine and unforgiving,” one that offered fluidity of movement, accommodating graceful and seamless transition from scene to scene.

As for costumes, Thompson knew from the start that with Oswald’s adaptation, she needed to work with costume designer Linda Cho. “I have always wanted to work with (Linda), but what drew me to her for this particular project is how she dresses women," Thompson told me. "While the set is very masculine, the women are all dressed to emphasize the power of their 'femaleness.' I love how Linda celebrates women’s bodies both in their femininity and strength.”

She admits that the liberties Schiller may have taken with the history encircling this work are what she is grateful for the most because it frees the production up to tell the story she wanted to tell in a way she felt people would respond to now, a timeless world that could access both the 1580s while still “planting a reliable foot in the present,” and avoid  turning the work into a museum piece.

But perhaps the real power in this new work lies in its ability to evade superfluity and tell its story, relating its themes independently, free of any extraneous context. “One of the great strengths of this play is that the story stands on its own,” Thompson insists. “If you’re familiar with the history, that’s wonderful but completely unnecessary to enjoying the play, which feels much more like a political thriller than a historical work. Regardless, our collective job is to fall so deeply into what we are watching that we forget what we know. Actors are charged with a similar task. You can’t play the end of the play at the beginning. We all come to the theater to feel. Human beings in conflict—that’s the event. The framework is the history, but we’re there to see the struggle.” 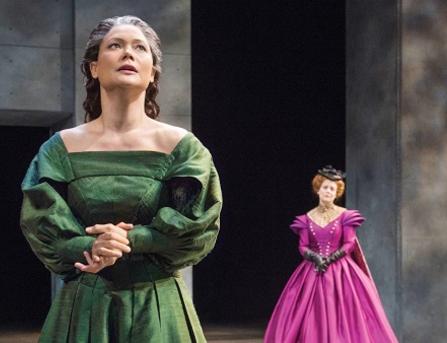 Chicago Shakespeare Theater takes on a visceral, salacious battle for the throne of England unleashed by royal cousins that could not be more different and yet so alike.