Jazz luminary Regina Carter will share a double bill with SFJazz Collective this spring in a concert that pays tribute to some of the greats of jazz (photo courtesy of Ms. Carter). 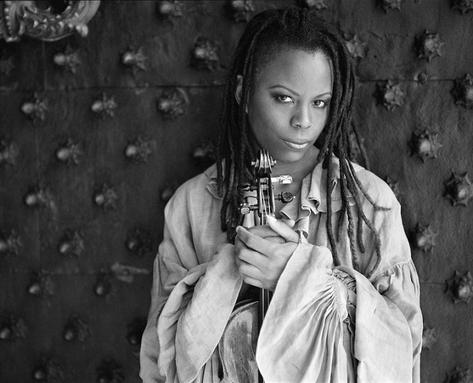 In celebration of the centennial year of Ella Fitzgerald’s birth, Carter has selected songs that spark a connection between the audience and the material, similar to the connection she describes as experiencing upon hearing Fitzgerald for the first time. Carter will perform songs from deep within Fitzgerald’s extensive catalog including “Crying in the Chapel,” "Undecided” and “Judy,” among others. She’ll be accompanied by her longtime rhythm section of bassist Chris Lightcap and drummer Alvester Garnett as well as pianist Xavier Davis and guitarist Marvin Dolly. Carter’s deep connection to Fitzgerald stretches back to her youth, when she was first introduced to her vocal stylings, which continue to influence Carter’s daring style. Carter’s new recording, Ella: Accentuate the Positive, was just recently released on April 21.

The SFJAZZ Collective’s program The Music of Miles & Original Compositions features new arrangements of classic works composed by and associated with Davis including “So What,” “Milestones” and “Nardis” from his late ’50s modal period, “Bitches Brew” from the seminal 1970 album, and “Tutu,” the title track of the funky 1986 pop record. These re-imagined arrangements are paired with new commissions of original compositions by SFJAZZ Collective members. Davis, of course, was an iconic trumpeter and visionary bandleader who recorded in various styles and settings with the best young players of his time.

Launched in 2004 and based at the SFJAZZ Center in San Francisco, the SFJAZZ Collective is an all-star, award-winning leaderless ensemble that uniquely demonstrates jazz as a democracy. Musicians include Miguel Zenón (alto saxophone and flute), David Sánchez (tenor saxophone), Sean Jones (trumpet), Robin Eubanks (trombone), Warren Wolf (vibraphone), Edward Simon (piano), Matt Penman (bass) and Obed Calvaire (drums). In addition to an outstanding lineup, the SFJAZZ Collective has been praised for its innovative approach to repertoire. Each year, the ensemble performs a new list of compositions by a modern master and new pieces by the collective members (commissioned by SFJAZZ). Through a pioneering approach, simultaneously honoring music history while championing the music's up-to-the-minute directions, the collective embodies SFJAZZ’s commitment to jazz as a living, ever-relevant art form.