“Chicago will take center stage in 2016, as more than 1,000 local and international artists will create a global celebration of Shakespeare like no other in the world,” said Mayor Rahm Emanuel. “During this landmark year, Shakespeare will be alive on our stages, in our schools and across our neighborhoods. The power of our world-class cultural institutions uniting behind one theme serves to amplify Chicago’s role as a global destination for cultural tourism.”

Spearheaded by Chicago Shakespeare Theater, this yearlong Quadricentennial festival will engage more than 500,000 Chicagoans and visitors to our city through 850 events exploring how Shakespeare’s words continue to live in Chicago and throughout the world’s great theater, dance, literature, music, cuisine and spectacle.

Highlights from Chicago partners: Lyric Opera of Chicago presents Charles Gounod’s soaring Romeo and Juliet; Chicago Symphony Orchestra’s Maestro Riccardo Muti culminates his cycle of Verdi’s Shakespeare operas with Falstaff; Art Institute of Chicago highlights Shakespeare-inspired visual art in a special exhibition; Chicago chefs and restaurateurs, including Rick Bayless, Alpana Singh and Ryan McCaskey, will create a culinary “Complete Works” in restaurants across the city; and Newberry Library’s Creating Shakespeare exhibition will bring together treasures from the British Library and the Folger Shakespeare Library alongside the Newberry’s own renowned Shakespeare collection. Chicago Shakespeare’s centerpiece of the celebration is Barbara Gaines’ six-play history cycle, "Tug of War," including Edward III, Henry V, Henry VI, Parts 1, 2 and 3, and Richard III. Two action-packed dramas in the spring and fall of 2016 trace the rise and fall of kings—and the uncommon courage of common men.

International artists participating in Shakespeare 400 Chicago will hail from Australia, Belarus, Belgium, China, Germany, India, Mexico, Poland, Russia, South Africa, the United Kingdom and beyond. International highlights include: Shakespeare’s Globe Theatre’s The Merchant of Venice, starring Jonathan Pryce at Chicago Shakespeare; Shanghai Peking Opera’s The Revenge of Prince Zi Dan (based on Hamlet) and the Hamburg Ballet’s Othello at the Harris Theater for Music and Dance.

“The poetry of Shakespeare’s words and his brilliant characters from all walks of life weave universal stories, speaking to artists across continents, cultures and centuries,” remarked CST’s founder and artistic director, Barbara Gaines. “We’re thrilled that our colleagues in Chicago and from across the world will join us in 2016 to bring his work to life in our global city. Shakespeare’s words move artists in every creative medium.”

During the festival, Shakespeare will also be celebrated across communities and throughout the City’s classrooms. Chicago Public Schools, Chicago Public Libraries and the Chicago Park District will highlight Shakespeare’s work in free programming for students and families. CPS students and teachers citywide can participate in the “Battle of the Bard”—a slam-style showcase designed in partnership with Chicago Youth Shakespeare to build community across neighborhoods and celebrate Shakespeare’s language through performance. A.B.L.E., an ensemble of adolescents with Down’s syndrome, is developing their own production of Twelfth Night. Partners including the Newberry Library, Chicago Humanities Festival, Illinois Humanities and Chicago Shakespeare have slated thought-provoking lecture and discussion series, classes and educational initiatives to foster a citywide conversation about the playwright’s legacy. Chicagoans and the world can engage with Shakespeare 400 Chicago and access vast digital resources and archives released around the festival across platforms—including online at www.shakespeare400chicago.com, as well as via social media.

The full line-up of Shakespeare 400 Chicago productions, events and programs will be announced in January 2016. More information can be found at www.shakespeare400chicago.com. 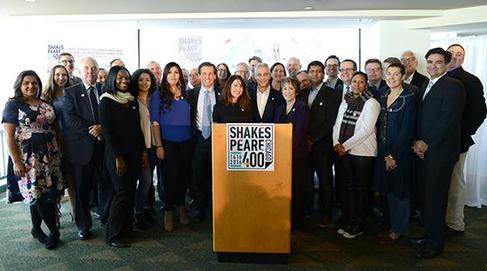