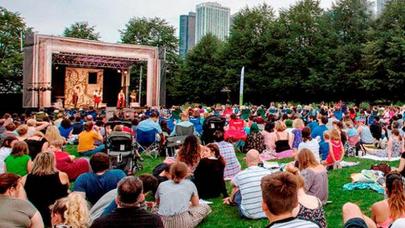 Get your fix for Shakespeare this summer as Chicago Shakespeare in the Parks makes its way throughout the area and soak in a little sun while you’re at it. And this summer, the suburbs are starting to get in on the action. On August 3, The Comedy of Errors will mount at Aurora’s Thomas J. Weisner RiverEdge Park (360 N. Broadway). The performance is free thanks to generous support by the Dunham Fund.

“Chicago Shakespeare in the Parks is a terrific outreach program, bringing the magic of live theater to the public in their own backyard, and we are thrilled that RiverEdge Park is the tour’s exclusive suburban stop,” said Tim Rater, President and CEO, RiverEdge Park. “West suburban residents shouldn’t miss this opportunity to see an amazing production from the acclaimed Chicago Shakespeare Theater, for free, right here in downtown Aurora.”

​So get thee to RiverEdge Park when a specially equipped truck rolls up, a stage unfolds and a company of top Chicago actors perform a free, 75-minute summer night production of William Shakespeare’s The Comedy of Errors along the banks of the Fox River.

Audiences will enjoy the wildly entertaining tale of a man and his servant arriving in a foreign land, searching for their long-lost twin brothers. Everywhere they go, strangers insist that they’re old friends. Mistaken identities abound, but in the end, chaos gives way to clarity in this comedy filled with mayhem and madness.

The cast features Meghan Murphy, as Aemilia/Courtezan. Paramount audiences will recall Murphy’s memorable performances as Fraulein Kost in Cabaret, the Acid Queen in The Who’s Tommy and Joanne in Rent.

Since the inception of the Chicago Shakespeare in the Parks program seven years ago, more than 155,000 Chicagoans have taken advantage of free performances in their communities.

​In addition to RiverEdge Park, Chicago Shakespeare in the Parks will present 24 performances of The Comedy of Errors at 18 parks throughout the city this summer, including Ogden Park, Columbus Park, Loyola Park and Ping Tom Memorial Park. The tour is made possible by a renewed civic, cultural and corporate partnership between Chicago Shakespeare Theater, the City of Chicago, Chicago Park District, Boeing and production sponsor BMO Harris Bank.

For the full list of tour dates and locations, visit chicagoshakes.com/parks.

​Guests at this event are invited to sit in the park’s fixed seating, first come, first serve, or bring bag chairs and blankets for seating in the back of the park. For more information, visit riveredgeaurora.com