Beluga whale Mauyak guiding her new calf around the surface of the water at the Shedd Aquarium's Oceanarium (photo courtesy of the Shedd Aqaurium). 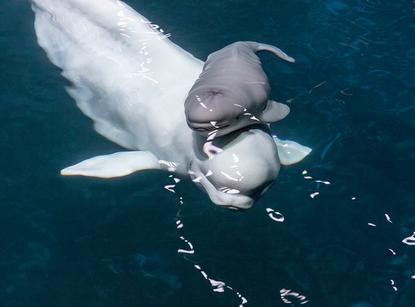 Chicago’s Shedd Aqaurium, a leader in animal care and welfare, recently announced that Mauyak (MY-yak), a 38-year-old beluga whale (Delphinapterus leucas) gave birth to a healthy calf on Wednesday, July 3 at 7:23 p.m. The entire birthing process – from the emergence of the baby’s flukes to complete delivery – took a total of 33 minutes. Both mother and calf are progressing well and will remain under 24-hour observation by Shedd’s animal care team for several months.

Shortly after the birth, the calf swam to the surface and took its first breath – assisted and supported by an attending Mauyak. The two then began to swim together and bond, as Mauyak guided the new arrival around its home. The sex of the calf has yet to be determined. Animal care estimates the calf to be approximately 5 feet in length and to weigh approximately 150 pounds.

Mauyak, whose name means “soft snow” in the language of the Inuit the native people of the Canadian Arctic, is an experienced mother. Her last calf, Kimalu, was born in 2012. Kimalu was previously the most recent beluga whale birth at Shedd, making this new arrival the first beluga calf at the aquarium in seven years.

“This is a humbling and fulfilling moment for our animal care teams, who have been preparing Mauyak for her big delivery for more than a year,” said Peggy Sloan, chief animal operations officer at Shedd. “Every pregnancy and birth brings significant information for both populations in accredited aquariums and their endangered counterparts in the wild.”

​“After the successful delivery, we are supporting Mauyak and watching her do what she’s proven she does best – caring for her new calf,” said Steve Aibel, senior director of marine mammals at Shedd. “Mauyak now begins the process of bonding and nursing with her new calf.  During this time, we will be watching closely 24-7 and gathering data on important beluga calf developmental milestones to share with the scientific community at large.”

Reproduction and births are rarely observed in the wild, and data that Shedd Aquarium collects from watching Mauyak and her calf’s development help inform researcher and wildlife management organizations dedicated to safeguarding wild beluga populations. For example, understanding critical neonatal development and birthing milestones can help Shedd’s partners in Canada know if pollution, shipping or human activity could be detrimental to the reproduction and recovery of the critically endangered beluga population in the St. Lawrence Seaway.

Shedd’s world-class animal care team has a long history of experience with marine mammal births. With each beluga pregnancy, and each birth, experts at the aquarium have the rare opportunity to observe, document and collect data that adds to our overall scientific understanding of the species. This would be difficult, if not impossible, to do in the wild.

​Caring for pregnant cetacean mothers and their calves at the aquarium also strengthen the skills necessary for Shedd’s Animal Response Team to lead rescue, rehabilitation and release efforts. For example, last year Shedd joined a team of experts in Alaska to provide triage for a stranded beluga calf  that was part of the critically endangered subpopulation of belugas in Cook Inlet.|

​Both mother and calf will be in the Abbott Oceanarium, and programming will be adjusted to ensure bonding time for mom and calf. Programming will adjust to include interpretive chats and progress updates on Mauyak and her new calf.  Viewing of Shedd’s sea otters, sea lions, penguins, dolphins and beluga whales will remain open and accessible.

​Ongoing updates will be available on Shedd’s website at www.sheddaquarium.org.