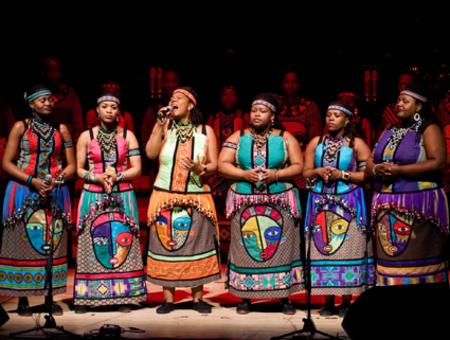 The Grammy Award-winning Soweto Gospel Choir will make its return to Chicago with an uplifting program titled Songs of the Free on Friday, November 16, at 8 p.m., for a Symphony Center Presents Special Concert. The South African group brings their signature blend of African gospel, freedom songs and international classics to a program inspired by their latest album, Freedom, which was released in September to mark the centennial of Nelson Mandela’s birth.

The 20 musicians of the Soweto Gospel Choir have been spreading joy and inspiration to audiences across the globe for nearly two decades. The first half of this concert features a rousing program of original songs celebrating the centennial of the birth of Nelson Mandela, for whom the choir performed on many occasions during his life. Following that, the performers share international gospel classics including their energetic take on Leonard Cohen’s “Hallelujah,” as well as “Amazing Grace.”

​Hailing from the town of Soweto, which is the birthplace of the South African democratic movement's struggle for freedom, the Soweto Gospel Choir is known for its captivating melodic and harmonic musical performances and mesmerizing showmanship. Since the choir emerged on the global music scene in 2002, it has won two Grammy Awards, scored two #1 Billboard World Music Chart albums and earned the distinction as the only South African music act to ever perform at the Oscars. The Soweto Gospel Choir has collaborated with several popular artists including U2, Aretha Franklin, Stevie Wonder, Robert Plant, Celine Dion, Red Hot Chili Peppers and Josh Groban.