Visitors to the Ground Level Arts Lab at Spertus Institute for Jewish Learning and Leadership are invited to step into Who Represents Us?: Andy Warhol’s Ten Portraits of Jews of the 20th Century, an exhibition featuring Andy Warhol’s provocative 1980 series of portraits memorializing ten luminaries of modern Jewish culture: Sarah Bernhardt, Louis Brandeis, Martin Buber, Albert Einstein, Sigmund Freud, George Gershwin, Franz Kafka, the Marx Brothers, Golda Meir, and Gertrude Stein. Warhol referred to these great thinkers, politicians, performers and writers as his “Jewish geniuses.” He depicted them in his signature pop-art fashion, splashed with color and shapes, blurring of boundaries between art and commerce.  The exhibition, which also includes other highlights from the Spertus collection, is on view March 23 through September 21, 2020.

The idea for the then-controversial portrait series came from art dealer Ronald Feldman who, together with Susan Morgenstein of the Jewish Community Center of Greater Washington, came up with the list of names. The series was warmly received by Jewish audiences despite negative reviews from art critics who considered the works exploitative. Hilton Kramer of The New York Times wrote, “The way it exploits its Jewish subjects without showing the slightest grasp of their significance is offensive—or would be, anyway, if the artist had not already treated so many non-Jewish subjects in the same tawdry manner.”

Ancillary events for this new exhibition include a free exhibition opening reception for Who Represents Us? takes place Monday, March 23 from 5:30 – 8:30 pm. Reservations are recommended at; and a discussion of lessons learned from the experiences of Israeli women in leadership by Dr. Mira Sucharov, Associate Professor of Political Science at Carleton University in Ottawa, and Spertus Institute’s Dean and Chief Academic Officer Dr. Keren E. Fraiman on Monday, April 27 at 7:00 p.m.

​Tickets ($8-$18) include a dessert reception and are available at spertus.edu. 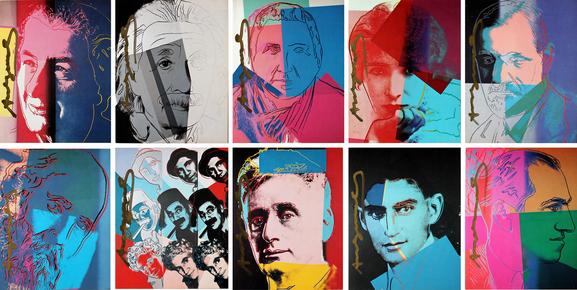