Eminent English choirmaster and composer Philip Moore will make his Chicago-area conducting debut when he leads the St. Charles Singers in an all-British season-finale program at 7:30 p.m. on Saturday, May 17, at Grace Lutheran Church in River Forest, and at 4 p.m. on Sunday, May 18, at Baker Memorial United Methodist Church, 307 Cedar Avenue in St. Charles. The concert will mark the St. Charles Singers’ first concert in the River Forest-Oak Park area since the mixed-voice professional chamber choir was founded three decades ago.

Titled “Bouquet of Voices,” the capstone program of the St. Charles Singers’ 30th concert season will offer the U.S. premiere of Moore’s “At the round earth’s imagined corners,” a choral setting of a religious sonnet by English Renaissance poet John Donne. Brass, organ, and percussion will accompany the choir in this Judgment Day meditation. Brass will include four trumpets, French horn, three trombones, and tuba.  The percussion section will comprise timpani, snare and bass drums, cymbals, glockenspiel, and xylophone.

Spanning from the English Renaissance to the present day, the program of sacred and secular music, including arrangements of British folk songs, will offer works about peace, with Memorial Day in mind, and works celebrating the joys of spring.

In addition to guest conductor Moore’s own composition, the program will include Edward Bairstow’s “Let All Mortal Flesh Keep Silent,” Benjamin Britten’s “The Evening Primrose,” and Gustav Holst’s “I Love My Love,” among a long list of other works.

Trained in the great cathedral performance traditions of England, Moore held the post of organist and master of the music at York Minster cathedral for 20 years. He studied at the Royal College of Music and has held the posts of assistant organist at Canterbury Cathedral and organist and master of the choristers at Guildford Cathedral. He has written and published more than 300 choral works.

St. Charles Singers’ founder and artistic director Jeffrey Hunt invited Moore to lead the chamber choir’s May concerts after England’s John Rutter, who was originally scheduled to conduct, withdrew due to health concerns.

“Philip Moore comes from the same tradition of British music that’s always played such an important part in the life of the St. Charles Singers,” Hunt explains. “With his participation, we’ll be able present the same type of concert we originally envisioned, but with another revered English composer-conductor on the podium.”

Tickets and general information about the St. Charles Singers are available at www.stcharlessingers.com or by calling (630) 513-5272.

Members of the St. Charles Singers (photo courtesy of the ensemble). 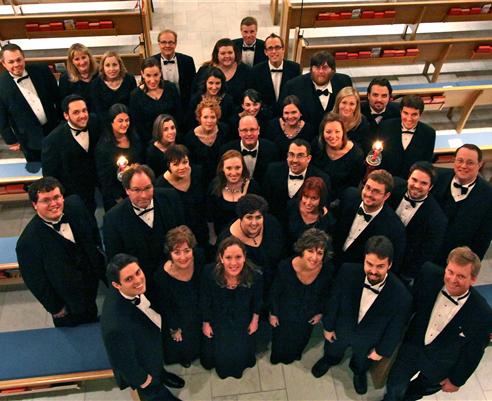