Exciting programming begins the new season for The Dance Center of Columbia College this fall as the Stephen Petronio Company prepares to grace the venue’s stage for the fourth time in its history. During a big 30 year anniversary season for the company last year, they embarked on a new initiative called “Bloodlines.” Petronio caused ripples in the dance world as he set out on this projected five-year collection that presents work by legendary and influential choreographers in the field of modern and postmodern dance. Curated by Petronio himself, these works will be performed by the Petronio company members and, as the choreographer explained, instead of elucidating his own ideas, this project looks deeper into the influences that perhaps served as their catalyst. “I’ve had a company for over 30 years,” Petronio told me. “And for these past years, it’s been all about my work so now “Bloodlines” pays homage to some of the postmodern masters that have influenced me and made my investigations and career possible.”

Petronio goes further than simply staging these momentous works on his company; in the next five years, he also plans to present them alongside his own as he continues to choreograph new works that compliment the historic ones. While many choreographers might shy away from such a daring feat, Petronio owns the challenge. “Of course I was nervous about it,” he explained. “Merce Cunningham is a master, he is the master...and I have these moments where I’m very aggressive and brave about what I want to do and then, of course, the night before I’m going to do it I think, ‘what are you thinking?’ You know, because of course it can go so many ways.” After the original premiere in New York City, however, Petronio explained that the risk paid off in droves, “The dance community was incredibly supportive, and I think they watched the work in the spirit that it was brought to them. We tried to do the most loving rendition of the work that we could and in the end I was very happy.”

For each of the works chosen, this will be the first time they will be performed by an American contemporary company outside of their company of origin. The Stephen Petronio Company makes its visit to The Dance Center in October, bringing three distinctive works with them: Merce Cunningham’s Rainforest, Petronio’s own Non Locomotor (the second part of a two part work), and Trisha Brown’s 1979 work, Glacial Decoy. “I unveiled Cunningham’s Rainforest last year, which was really exciting and so the second part of that project is Trisha Brown’s Glacial Decoy. Columbia College Chicago is the first place to get all three together,” he told me.

Rainforest, Cunningham’s 1968 masterpiece incorporates visual design by Andy Warhol, and music by David Tudor in a much anticipated work for Chicago audiences. For those audiences, it will be a rare treat to see a Cunningham work restaged after his death in 2009 and the disbanding of his company, upon his posthumous request, in 2011. When asked whether he thought his dancers, most of them not traditionally Cunningham trained, would be able to dance the work up to standard, Petronio explained, “I was not too sure how it would work, but here’s what I am confident about: I’ve got great dancers and their curiosity is part of their greatness. I think the challenge is that they’re masters of Petronio so to take those who are a master in the Petronio language, that haven’t studied Cunningham technique, and to go with an open heart and open mind into Merce’s work is just a testament to how brave they are.”

Non Locomotor, Petronio’s own work will grace the stage in the same program. Petronio speaks about the piece, appropriately drawing inspiration from his mentor, Cunningham. The work is a continuation of his previous work, Locomotor, which focused on hysterical movement through space, carving patterns on the stage. The companion, Non Locomotor, appearing in Chicago this time without its partner piece, is Petronio’s expression of “taking that instinct to move through space and turning it into the body…It deals more with energy pathways that can go up and down the spine,” Petronio explained.  Especially interesting is the use of these physical ‘pathways’ from the previous Locomotor. These patterns are used as a map for movement within the spine in Non, and will be seen coursing through dancers’ bodies, up and down spines, from heads to toes, and across the sagittal plane of the arms. Non Locomotor shares Locomotor’s sound designer, Clams Casino, and employs Narciso Rodriguez as the costume designer. Said Petronio of the work, “It’s abstract movement exploration at a fast clip.”

Trisha Brown’s Glacial Decoy appears on the bill as a newer addition, and as the next part of the five-part “Bloodlines”  lineup. Glacial Decoy hits a more personal note for Petronio than the Cunningham work as he actually danced in it himself. “I entered Trisha’s company at that moment, when they were just completing that work so it is quite important for me,” Petronio reflected. The work which happens in silence, employs visual and costume design by Robert Rauschenberg.

Though it is yet to be seen whether the entire “Bloodlines” project will be revealed on Chicago stages as it progresses over the coming years, it proves an exciting opportunity for the city’s audiences to see two of its first installments in one program. “Bloodlines” will be closely followed for its historical significance and will set a precedent in the wider dance community for preserving its moving history. As Petronio pointed out, “the idea is to bring history in an embodied way instead of just an intellectual way.” And that it does, with “Bloodlines,” recreating moving moments from American modern dance’s potent and historic timeline.

Stephen Petronio Company will perform "Bloodlines" at the Dance Center of Columbia College October 1, 2 and 3, this fall. For more information or for tickets, visit colum.edu/dance-center.

The acclaimed Stephen Petronio Company will present "Bloodlines" at the Dance Center of Columbia Chicago this season harkening back to Petronio's many influences in dance. 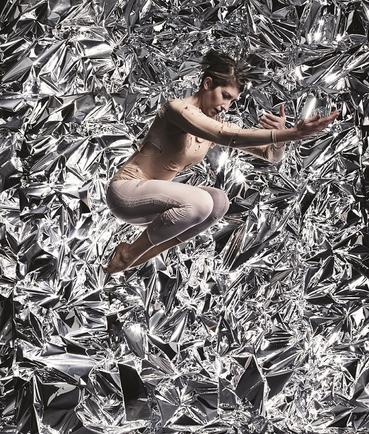 "Bloodlines" to take Stephen Petronio Company Back to Their Roots