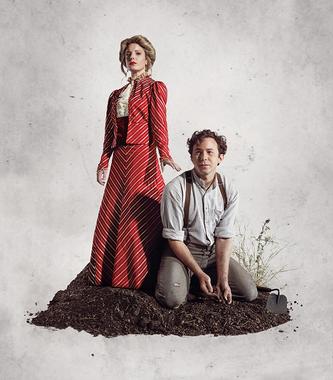 This fall Steppenwolf Theatre Company launches its landmark 40th season with a large-scale world premiere production of John Steinbeck’s masterpiece East of Eden, a story of jealousy, passion and the pain of expectations. Adapted by two-time Tony Award winner and ensemble member Frank Galati and directed by Steppenwolf co-founder Terry Kinney, the epic production will feature a 10-person cast including ensemble members Kate Arrington, Francis Guinan, Tim Hopper and Alan Wilder. A full underscore of originally composed music by Rob Milburn and Michael Bodeen will be performed live for the production.

“For me, this adaptation and production are the continuation of a journey Steppenwolf began with The Grapes of Wrath,” noted Galati, “After 40 years, our company is still together, still telling stories, still an ensemble against all odds. Now our co-founder Terry Kinney (who played the mesmerizing Jim Casey in Grapes) is directing…Our bond as an ensemble has always made each of us better. We have tried damned hard to be honest. I think that's what Steinbeck valued most."

Steppenwolf’s connection with John Steinbeck can be traced back to the company’s 1988 production of The Grapes of Wrath, which Galati also adapted and directed. The production transferred to Broadway, California and London and received two Tony Awards—Best Play and Best Director—garnering Steppenwolf international acclaim. Ensemble members Francis Guinan, Tim Hopper, Terry Kinney and Alan Wilder, who all performed in the original production of The Grapes of Wrath, will reunite for this new adaptation.

Terry Kinney co-founded Steppenwolf in 1976 with Gary Sinise and Jeff Perry and has directed many notable productions with the company, including John Steinbeck’s Of Mice and Men, The Violet Hour and One Flew Over The Cuckoo's Nest, which won the Tony Award for Best Revival of a Play in 2000. Kinney’s New York directing credits include the world premiere of Checkers by Doug McGrath, reasons to be pretty and The Money Shot for MCC and Broadway, and After Ashley and Beautiful Child at the Vineyard Theatre, among others. He is widely known for his roles in HBO’s prison drama Oz, as well as the ABC series, The Black Box. Recently, he appeared in HBO's Show Me a Hero and he recurs on Showtime's new series, Billions.

Frank Galati has been a member of the Steppenwolf ensemble since 1986. He has received nine Joseph Jefferson Awards for his work in Chicago theater. He won two Tony Awards in 1990 for his adaptation and direction of Steppenwolf’s production of The Grapes of Wrath and was nominated for a Tony Award in 1998 for directing the musical Ragtime. He has also staged operas for Chicago Opera Theatre, Lyric Opera of
Chicago and the Metropolitan Opera House. And in 1989, Galati was nominated for an Academy Award for his screenplay (with Lawrence Kasdan) of The Accidental Tourist and in 2000 he was inducted into the American Academy of Arts and Sciences. Galati is a professor emeritus in the department of performance studies at Northwestern University.