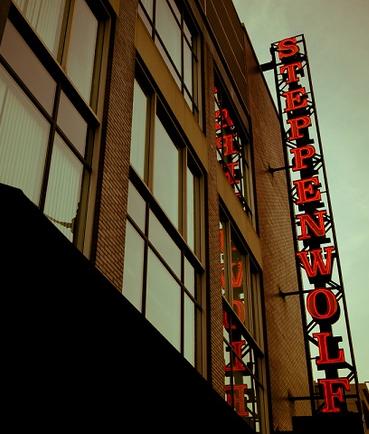 Theater-goers in Chicago have dozens of options for great plays, musicals and performance art, but amid the countless collectives in the Windy City, it’s rare that you find one that offers audiences an opportunity to experience all of that and more from a single powerhouse ensemble: Chicagoans have that in the legendary Steppenwolf Theatre Company.

This year marks the 40th Anniversary of Steppenwolf. Founded in the mid-seventies by Gary Sinise, Terry Kinney and Jeff Perry, Steppenwolf has come quite a long way from its early days in the basement of a Unitarian church in Highland Park. In those early days, the actors were unknown and the only real limitations were budgetary.

Since that time, the budgets have increased substantially, as has the profile of the company itself. Steppenwolf cemented its place among the most innovative theater companies in America with ground-breaking productions of True West, Balm in Gilead, and the Tony Award-winning Grapes of Wrath. It  moved from that 88-seat theater space in the basement of a north shore church to a 134-seat space at Jane Addams Hull House on north Broadway to its currently expanding digs on north Halsted Street in Chicago’s Lincoln Park. And though Steppenwolf's footprint has both literally and metaphorically grown, its dedication to creating innovative theater has remained constant.

“Steppenwolf has evolved in almost miraculous ways,” notes ensemble member (and Tony Award-winner) Frank Galati. “Its survival is pretty astonishing, considering the size of the group and the distances between us as individuals.”

In fact, it is quite unusual in this country to have an acting ensemble working together on such a consistent basis.

Steppenwolf is, in fact, the oldest ensemble theater in the United States. Considering its stature among American theaters, it's quite interesting how the invitation to join the ensemble felt both casual and weighty to some of their most well-known members. Frank Galati was asked to “pop up” to Gary Sinise's office where the invitation to join the ensemble was remarkably nonchalant.

For Anna D. Shapiro, it was fairly unexpected as few directors were in the ensemble, “but Tracy Letts told Martha (Lavey, former artistic director) if she wasn't going to make me an ensemble member, she should stop working with me,” recalls Shapiro. “It was both banal and magical, which I think is very Steppenwolf.”

Alana Arenas was asked to join following her turn in The Bluest Eye Off-Broadway. “When I came back, I received an email from Martha Lavey asking to meet with me. I have been notoriously slow on the technology uptake. I didn't respond to the email. Email was such a new thing to me. I'd just gotten a personal computer...So Martha called me and reminded me she sent me an email. I was very embarrassed that I forgot to email her back and then I was panic-stricken with trying to figure out what I could have possibly done in New York to get called into Martha's office! So we meet and she extends membership to me and I remember asking, what does being an ensemble member mean? What do you have to do to get kicked out? But I think the stupidest thing I said in the meeting was, 'Man, I just made up my mind to move to New York,' to which Martha replied, 'Why don't you take this and see what happens.'”

What happened to Arenas and to many of the ensemble members is they developed continued passion for the work being done back here in Chicago. Many of Steppenwolf's most successful actors maintain a real passion for being part of the company despite the challenges of some fairly high profile careers. Most of the original members are still members—in name and in deed. It's not unusual for ensemble members to follow up a turn on Broadway or in a successful film with a production at Steppenwolf. In fact, the 40th Anniversary season is packed with artists who have a long-standing relationship with the company as well as artists who are at the beginnings of their stage careers.

“We as a community have to balance where we came from and where we’re going,” says newly-appointed artistic director Anna Shapiro. “We know that the most important thing is that we do our own work in our own back yard, and we do the work for the people of Chicago.”

This season marks not just a milestone year for Steppenwolf, but a significant change in artistic leadership as Shapiro takes over for Martha Lavey—Steppenwolf's artistic director for the past 20-years. Lavey is credited for much of Steppenwolf's success in recent years, having shepherded many ground-breaking plays from development to production.

“Really, the tenure of Martha Lavey has been—more than any other single factor—the reason for the flourishing, and flowering of Steppenwolf over the last 20 years,” reflects Galati. “We've doubled in size and in diversity.”Although

Although Lavey's tenure as artistic director has come to an end, she remains a member of the ensemble. While change in leadership is clearly a fact of life in live theater, some theater-goers may wonder whether Shapiro will be as invested in working in Chicago as Lavey was. Much has been made of Shapiro's talent for producing theater that transfers to Broadway and that piques the interest of high-profile, A-list actors. But Shapiro is unwavering in her commitment to great theater right here in the Windy City.

“The idea that your eyes are on Broadway is a funny idea to me,” She explains. “Broadway doesn’t have its eye on you....if anyone knows that you can’t crack that code, it’s us. You want to make the best theater you can make. (Chicago) is the most important place to us.”

Steppenwolf's investment in Chicago is not only evident in their continued growth in their Lincoln Park home, but in the way they trust their audiences will be open to such a wide variety of productions. Few other companies foster such a volume of new work and regional premieres, and the 40th anniversary season is no exception. Featuring the world premieres of Frank Galati's adaptation of Steinbeck's East of Eden, the world-premiere of Tracy Letts' Mary Page Marlowe, and the Chicago premieres of Domesticated, The Flick, and Between Riverside and Crazy, audiences won't be disappointed in the power and diversity on Steppenwolf's stage this new season.

Says Shapiro, “What’s really important is that we get access to the plays and writers we want. (Steppenwolf) is a place that is led by the interests and the original affections of a group of actors. But actors don’t exist alone. They need the avenues of expressions with directors and writers.”

Those directors and writers certainly come through with some incredibly strong work, knowing that Steppenwolf is the artistic home to artists who are willing and able to jump in and collaborate, willing to work as hard as they have to and willing to give as much as they get.

Arenas is certainly grateful for that give-and-take. “One of the things that has helped me most in the Steppenwolf environment is being trusted as an artist,” she says. “It is freeing to be trusted, it feels like an invitation to deeply explore, to daringly create and constantly pursue going farther.”

After 40 years of exploring, challenging, and creating some of the best theater in the country, Steppenwolf shows no signs of slowing down. Enthuses Galati, “The company has never been in better shape. It's trembling with excitement on the next chapter of the theater's life.” And so are Chicago’s audiences.

Here's to 40 more years of excitement.