Steppenwolf Theatre Company’s eclectic LookOut Series will present the Chicago premiere of BOOMERANG's Repercussion, created in collaboration with Greg Saunier, drummer and founding member of the internationally acclaimed band Deerhoof. LookOut is Steppenwolf’s multi-genre performance series presenting a wide variety of work from a diverse array of voices and artists, emerging and established alike. LookOut was launched this summer and programming continues throughout the fall presenting 18 different programs in Steppenwolfs’s 1700 Theatre.

In their LookOut debut, YC-based dance and performance project BOOMERANG, hailed as the “punk Mozarts of dance,” will make the Chicago premiere of their first evening-length work, Repercussion. This work explores relationships between movement and sound. It first premiered in 2016 with a six-night run in New York City as a commission from Dixon Place. The production was well-received by Robert Wilson, who has been described as the “world’s foremost avant-garde theatre artist” by the New York Times and who nominated Repercussion to premiere in Paris, France at The Arts Arena this past June. Wilson praised Repercussion: “Brilliant. Exceptionally strong work. BOOMERANG made me listen.”

Repercussion combines the daring and vulnerable artistry of dancers Matty Davis and Adrian Galvin with poetically nuanced choreography by Kora Radella. Deerhoof’s Greg Saunier provides physically-charged, expressive percussion that sets the tone and further embodies the work’s physical exploration of “active forgetting,” based on new writing by MacArthur “Genius” and cultural critic Lewis Hyde. Award-winning playwright Will Arbery is the dramaturg for the production. The costumes are designed by threeASFOUR. Recipients of the Cooper-Hewitt/Smithsonian Museum's 2015 National Design Award, threeASFOUR has collaborated with numerous artists and musicians, including Björk, Yoko Ono and Matthew Barney.

​The project, BOOMERANG, was created in 2012 by co­-directors Matty Davis and Kora Radella with founding member Adrian Galvin. Recognizing the body as an evolving repository for both physical and psychological life, BOOMERANG sifts through and siphons from the rich, eclectic histories that constitute the personhoods of the people with whom they work. BOOMERANG has performed their work throughout New York City, as well as in Barcelona, Berlin, Chicago, Cleveland, Grand Rapids and Pittsburgh. In 2015, BOOMERANG was shortlisted as 1 of 20 juried finalists for the Grand Jury Prize at ArtPrize7.

Repercussion will play a limited run of two performances only: October 29 at 8 p.m. and October 30 at 4 p.m. in the 1700 Theatre, an intimate cabaret-style venue connected to Steppenwolf’s own Front Bar: Coffee and Drinks at 1700 N Halsted. Tickets to Repercussion are $20 and can be purchased at steppenwolf.org or by calling 312.335.1650. 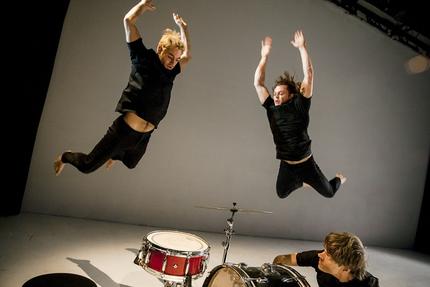 BOOMERANG'S Repercussion will make its Chicago debut in the new Steppenwolf LookOut series. Repercussion incorporates the supercharged dance of the BOOMERANG dance project and the music of Greg Saunier from the band Deerhoof (photo by Mark Davis).