On December 10, 2018 at the Radisson Blu Aqua Hotel (221 N Columbus  Dr.), Steppenwolf Theatre Company gathered with 300 leaders from Chicago’s business and civic communities for the 10th Anniversary Steppenwolf Women in the Arts fundraising luncheon to honor OBIE, Helen Hayes and NAACP Award-winning actor and playwright Danai Gurira. Ms. Gurira was also recently appointed a United Nations Goodwill Ambassador, focusing on gender equality and women's rights. Author of the hit play, Familiar, which is currently running through January 13, 2019 in Steppenwolf’s Downstairs Theatre, Ms. Gurira was joined by Steppenwolf Artistic Director Anna D. Shapiro and Steppenwolf Education Manager Jared Bellot for a warm and candid conversation about her impressive acting career on-screen and on-stage, her award-winning plays and her impact as an activist and philanthropist.

The event raised $200,000 for Steppenwolf’s extensive educational and professional development programs, including the nationally recognized Steppenwolf for Young Adults program and the School at Steppenwolf.

​Ms. Shapiro and Co-chair of the 10th Anniversary Women in the Arts luncheon Stephanie B. Smith welcomed guests with opening remarks, followed by ensemble member Kathryn Erbe introducing an inspiring video, created by Joel Moorman, detailing Steppenwolf education programs. Ensemble member Celeste M. Cooper welcomed guests back from lunch before introducing a video overviewing Ms. Gurira’s impressive career. The final event of the luncheon was a lively and spontaneous conversation between Danai Gurira, Anna D. Shapiro and Education Manager Jared Bellot. Ms. Gurira reflected on the journey of her career, noting that she started writing plays in part because she couldn’t find existing works that contained the characters she wanted to play, and she continues to write plays featuring stories centered on the experiences of African and American African women and girls. She also shared that she is inspired by African artists who used their work to help end apartheid and hopes that her own work functions to bring awareness to experiences that American audiences aren’t usually aware of. Some of these stories are of African women and girls, while others, like her play Familiar, are about the cross-cultural experiences that immigrant and first-generation households have. Ms. Gurira also talked about the charities she’s involved with that help African girls and African artists. Ms. Shapiro also shared her appreciation for the women characters in Ms. Gurira’s plays.

​Danai Gurira is acknowledged as one of today’s freshest voices for the stage as the playwright of critically acclaimed In the Continuum, Eclipsed, The Convert and Familiar. These plays have garnered Danai multiple awards including an OBIE Award, two Helen Hayes Awards, and an NAACP Award, in addition to a Tony nomination for best play (Eclipsed).Best known for her roles of Michonne on AMC’s The Walking Dead, one of television’s most watched programs, and Okoye in Marvel’s Black Panther and Avengers: Infinity War, Danai’s performances have garnered the attention of audiences worldwide. Upcoming projects include Gurira adapting Chimamanda Ngozi Adichie’s book, Americanah, into a miniseries, and her play, The Convert, will be staged at the Young Vic theatre in London in December.
​ 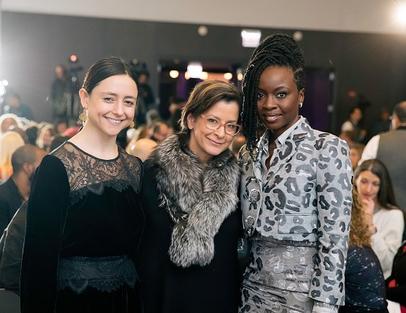